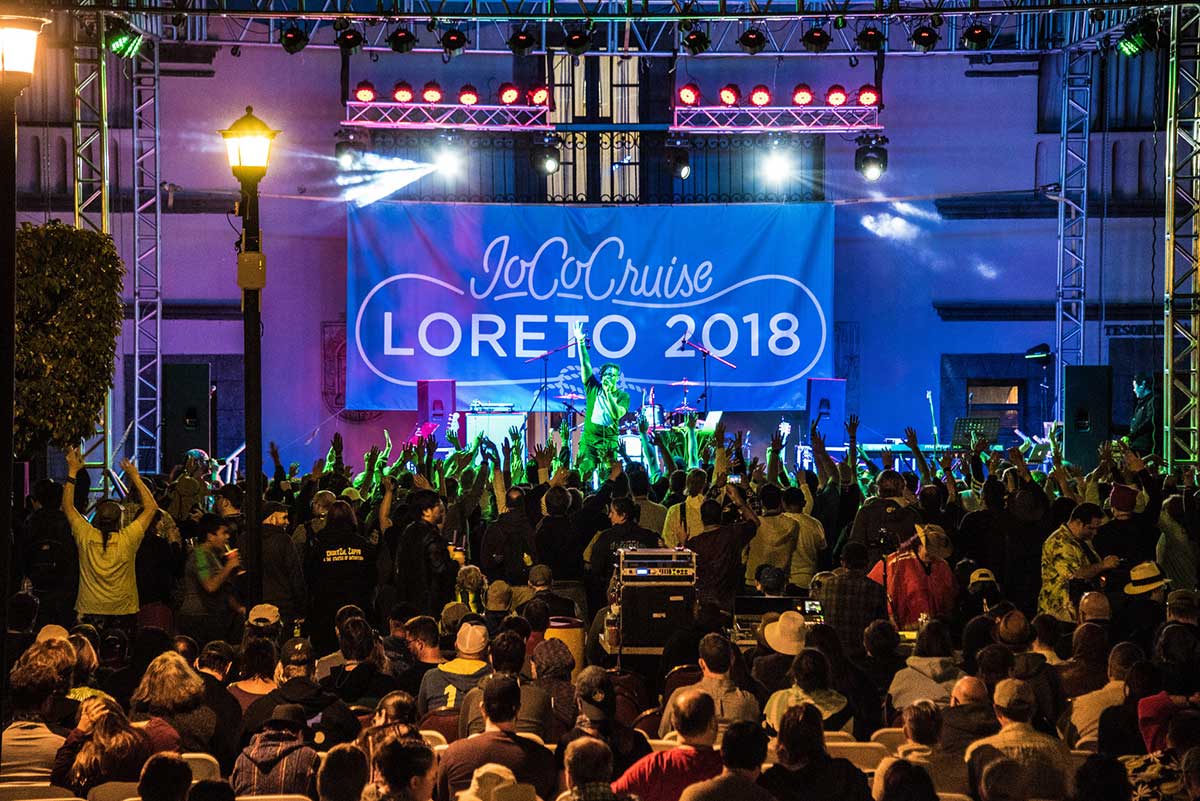 Because you are a Boing Boing reader, you probably know who Jonathan Coulton is. He was a computer programmer who happened to be a wonderful singer/songwriter. In 2005 he quit his coding job and became a full-time musician, writing and recording catchy songs that won the hearts of nerds around the world.

Eight years ago, Coulton invited his fans to join him on a cruise ship. His idea was to have a week-long floating "summer camp" for geeks, with lots of tabletop gaming, cosplaying, music, comedy, comic books, science fiction readings, panels, presentations, and workshops. About 375 "Sea Monkeys" took him up on his offer. It turned out to be something people loved, and so the “JoCo Cruise” became an annual event. I was invited this year as a performer (doing talks, panels, and workshops), joining 1,600 other Sea Monkeys to take over an entire cruise ship (Holland America's ms Oosterdam) for a trip from San Diego to Baja California, Mexico. It was the eighth JoCo Cruise, and Carla and my daughter Jane came with me.

This was the second cruise in my life. I’d taken one with Carla about 25 years ago. It was on a Carnival Cruise ship, a cruise line that David Foster Wallace describes in A Supposedly Fun Thing I'll Never Do Again as the “Wal-Mart of the cruise industry, which the other lines refer to sometimes as ‘Carnivore.’” I didn’t have a great time on that earlier cruise, so I wasn’t looking especially forward to the living-on-a-boat-and-eating-crappy-food part of the trip, but as soon as we boarded the ms Oosterdam in the Port of San Diego I realized this was going to be a lot better than the Carnival Cruise. For starters, the boat was gorgeous and clean and the food was excellent. There was a poolside taco bar that I visited frequently, several restaurants, lots of cozy nooks to hang out, and a buffet that was open until late at night. There was also 24-hour-room service at no extra charge. I ate my way from one side of the ship to the other, gaining five pounds over the week. Also, this cruise was a full-ship charter - Sea Monkeys only. As JoCo says, having the entire ship means not "having to juggle and fit our programming around the rest of the passengers and their schedule. Because we are the rest of the passengers!" That made all the difference in the world.

The thing that really made the cruise unique, though, was the passengers. I could relate to everyone! (JoCo describes the passengers as "technophiles, tabletop gamers, and creative-minded people of all stripes." Sounds right to me.) A lot of the people told me they've been reading Boing Boing since it was a print zine. A couple of people even said they have the first issue, which came out in 1988! Everyone was interesting. Some dressed in fancy costumes. Many carried ukuleles. There were 10-year-olds and 70-year-olds. I felt comfortable around these people and temporarily transformed from being a full-on introvert into a semi-introvert!

The Sea Monkeys were in a state of bliss being together and doing things they loved. I soon learned that the thing we all loved the most was playing games. Coulton told me that the Sea Monkeys had brought with them almost 2,000 pounds of tabletop games, which were collected on shelves in a library in the main restaurant so people could check them out and play them. Everywhere you looked on the ship people were playing games. We played Letter Tycoon almost every day. Jane and I loved playing social deduction/deception games like Two Rooms and a Boom and One Night Ultimate Werewolf. Playing these games late into the night was one of my favorite parts of the cruise.

In addition to games there were many other activities. Each day was packed with stuff to do, such as making puppets, taking a photography class, going to a comic book writing workshop, watching a movie like Star Trek IV: The Voyage Home in the screening room, or listening to a talk about black holes and explosions in the Universe. The staff did a great job of making things run smoothly. It really did feel like summer camp, only with better food and funner things to do. The nightly concerts featured comedy, music, interviews, and talks. I went on stage and told my story of losing my Bitcoin wallet password. I also gave a talk about the history of making things, and organized a card magic meetup.

Here’s a list of all the performers, who were also geeky, friendly, and approachable:

I spent a lot of time on the 10th level of the boat in the Explorer’s Lounge – ordering espressos, playing Zelda: Breath of the Wild on the Nintendo Switch Carla gave me for Valentine’s Day, reading an advance copy of Gary Lachman's scary and fascinating book, Dark Star Rising: Magick and Power in the Age of Trump, and staring out the wall-to-wall, floor-to-ceiling windows at the endless ocean.

We stopped in three places in Baja California: Cabo San Lucas, Loreto, and La Paz. My favorite by far was the little town of Loreto. It was quiet and pretty, and they had good ice cream, as author Patrick Rothfuss can attest:

Some people never even got off the boat, because they were having too much fun playing games and doing the scheduled activities.

It's hard to convey how wonderful this cruise really was. Carla, Jane, and I didn't want it to end. We want to do it again next year!

JoCo Cruise 2019 will be in the Caribbean. It sails March 9-16 from Ft. Lauderdale Florida, and the ports of call are Half Moon Cay, San Juan, and Tortola. The special guests are They Might Be Giants! If you register for JoCo 2019, tell them I sent you!

We were the last people off the ship! We spent all morning in the Explorer's Lounge.