Police discover over 10,000 endangered tortoises jammed into one small house 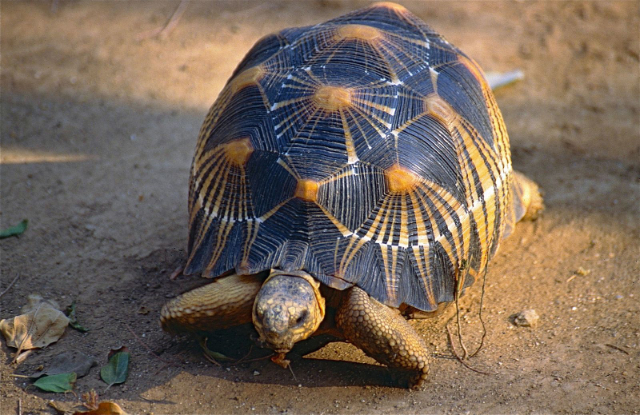 An overwhelming stench of poop and urine led authorities to check out what was going on in an unassuming two-story house in Toliara, Madagascar. When they opened the front door, they were shocked to find the house full of endangered tortoises--10,068, to be exact. According to Soary Randrianjafizanaka, a representative from Madagascar's environmental protection agency, so many of the poor little critters were jammed into the house that they literally had no room to move.

In total the house contained 9,888 live radiated tortoises, a rare species found only in Madagascar—and 180 dead ones. Randrianjafizanaka helped count them as rescuers loaded them onto six trucks that made several trips to Le Village Des Tortues (Turtle Village in French), a private wildlife rehabilitation facility in Ifaty, 18 miles north of Toliara. It took until early the following morning to transfer all the tortoises to the rescue center.

The majority of the turtles taken to the rehabilitation facility are doing well, now that they've been cleaned up, moved into more suitable quarters, and provided with veterinary care. Unfortunately, close to 600 of the turtles have died since being removed from the house, due to dehydration or infection--the result of their long neglect.

With a shrinking population of around three million of the reptiles, the trade of radiated turtles, each of which can have shells up to 16 inches across and weigh as much as 35 pounds, is illegal in 182 countries. That makes the turtles an attractive product for blackmarket traders operating out of Madagascar, to export to shady buyers around the world.