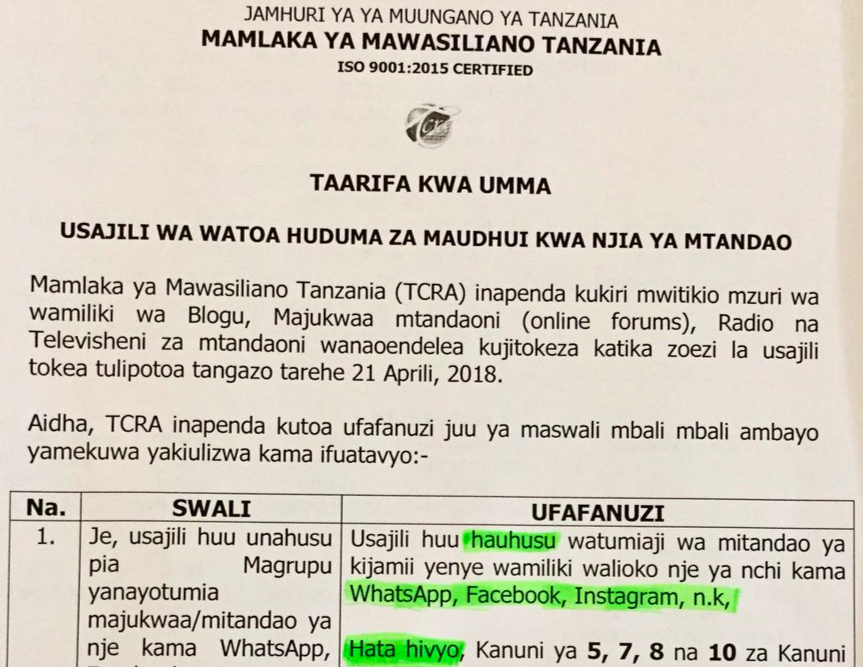 As of this Friday, anyone operating an independent online presence in Tanzania will have to pay a licensing fee equivalent to an average year's wages, and submit to a harsh set of censorship rules, as well as an obligation to unmask anonymous posters and commenters, with stiff penalties for noncompliance.

The rule covers blogs, podcasts, YouTube channels and other forms of independent media. Failure to license your channel triggers fines of "not less than five million Tanzanian shillings" (USD2,500 -- almost three years' wages) and/or prison sentences of at least a year.

Legal challenges to the rule have failed, clearing the way for it to take effect on the 15th.

Among the sites that have shut down in advance of the rule are Jamii Forum (called the "Tanzanian Reddit" and the "Tanzanian Wikileaks"), whose co-founder was arrested in December 2016 for refusing to identify the sites members.

Also gone are the personal sites of prominent Tanzanian commentators like Aikande Kwayu and Elsie Eyakuze. Others sites have taken refuge outside Tanzania: the Udadisi blog has been transferred to Takura Zhangazha, who lives in Zimbabwe.

Licensed bloggers are bound over to a complex set of rules, including a mandate to identify all their commenters, and to assist police in prosecuting commenters whose speech is deemed unlawful.

Online independent media has surged since it first came to Tanzania in 2007, presenting an alternative to the state-aligned tame press.

In an interview, Jamii Forum founder Maxence Melo told The Citizen: “It is obvious that our platform was being targeted when this regulation was formulated.”

The $900 USD annual license fee is a substantial amount of money in a country where nearly one-third of the population still live in extreme poverty. The requirement to register platforms and obtain a tax clearance certificate may be a bureaucratic hurdle as most bloggers are individuals without registered companies. Blog and online media owners are first required to be granted a license, and then, to make matters more complicated, they must adhere to a rather complex set of regulations.

I also think the problem is not the payment as much as the subsequent responsibility following the license (if granted). It is not only a self-censorship license but a way to become the state's tool to censor others (contributors) civic right to express.

In January of 2018, I was hired by the Civic Ensemble of Ithaca, New York to take part in a fascinating playwriting opportunity. The company had started a ReEntry Theatre program in 2015, teaming with state social services to implement a theatre education curriculum to help people dealing with incarceration and substance abuse rehabilitation to […]