Underneath ancient Mexican temple, archeologists find an even older one 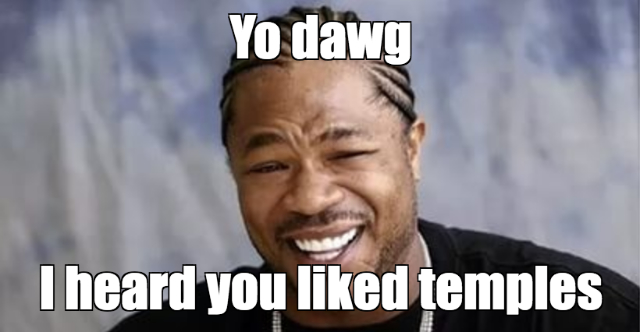 Last September, an 7.1 magnitude earthquake in Mexico did all kinds of crazy damage to buildings, infrastructure and ended far too many lives. It’s hard to find anything good in the midsts of a mess like that, but here we are: According to the BBC, a pyramid in Morelos (around 40 miles south of Mexico City,) was damaged by the quake. While assessing how much the quake had messed the ancient structure up, Archaeologists discovered that, underneath the pyramid, there was an even older temple that they hadn’t known was there.

The temple is nestled inside the Teopanzolco pyramid in Morelos state, 70km (43 miles) south of Mexico City.

It is thought to date back to 1150 and to belong to the Tlahuica culture, one of the Aztec peoples living in central Mexico.

The structure is dedicated to Tláloc, the Aztec rain god.

Archaeologists say it would have measured 6m by 4m (20ft by 13ft). Among the temple's remains they also found an incense burner and ceramic shards.

According to people far smarter about old stuff than most of us are, the structures are the Teopanzolco site date back to the 13th century. The temple underneath of that 13th century pyramid? It’s older--but how much older remains to be seen.

At a press conference held by Mexico's Instituto Nacional de Antropología e Historia (INAH,) Isabel Campos Goenaga, the director of the INAH's Morelos Center and archeologist Georgia Bravo Lopez told journalists that the newly discovered temple was located about two meters below the floor of the pyramid. Despite having been sealed off from the world for who-knows-how-long, the temple isn't in great shape. While it's believed that the temple's walls were once covered in stucco, humidity and the quake ensured that its interior looked like the inside of a frat house at the end of frosh week.

So much history underneath our noses and no one the wiser of it.