Russians' support for Putin drops off a cliff after pension cuts 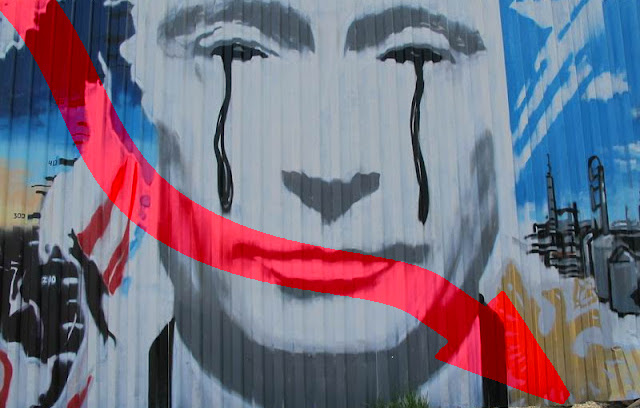 The latest data from Levada, an independent Russian pollster, finds that support for all Russian political figures, including Vladimir Putin, has plunged, following a shift in the pension system that raised the retirement age by five years.

Russia is an economic and political basket case whose frail economy was shattered by declines in oil prices, and the systematic looting of the system by its oligarch class imbued the whole system with a brittleness that has left it struggling to recover.

Russia's state really only excels at one thing: manipulating public opinion (which is why it was so easy for so many Americans to believe that Russian political manipulation changed the outcome of the 2016 election. Putin's inner circle is obsessed with opinion polls and has an extensive playbook for tweaking public perception of the Russian state.

But the pension shock appears to have exceeded even Putin's capacity to steer the national conversation -- though Putin did manage to salvage something here, by convincing the public that the mismanagement of the Russian state was a sin committed by the entire political class, not just Putin, and thus the entire political system's star has fallen along with Putin's, leaving him the leader of the discredited pack (this is not dissimilar to the Republican tactic of claiming that the US Government is intrinsically corrupt and inept, which gives it cover for its own corruption and ineptitude).

The demographics of the newly disenchanted are nevertheless promising: Russia's existing anti-Putin vanguard is young and fearless, while the elderly had lost the revolutionary fervor of 1989 and resigned themselves to living under a corrupt strongman. As retirement-aged Russians lose respect for Putin, there's an intriguing possibility of a pincer maneuver in which old and young find common cause.

In a poll by the independent Levada Centre, 39% of Russians listed Putin as a politican they trust. That is a 20% decrease from November 2017, when Putin was named by 59% of Russians, according to the same polling agency.

The Levada polls are the latest to show a strong backlash as the Kremlin pushes unpopular social reforms to relieve pressure on the budget. This month, 45% of Russians told FOM (Public Opinion Foundation), a polling agency close to the Kremlin, they would vote for Putin if elections were held this Sunday. That rating was down from 67% at the beginning of the year.

It is among the lowest support Putin has held in the last decade, according to FOM data, tied only with his support in late 2013 just before the annexation of Crimea and a wave of patriotic fervour.