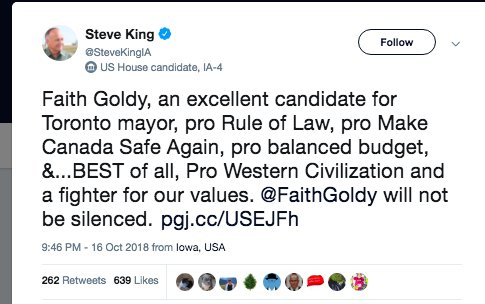 Iowa Republican Steve King is graduating from retweeting white supremacists and earsplitting dogwhistles to openly endorsing the matter of their movement.

Faith Goldy, an excellent candidate for Toronto mayor, pro Rule of Law, pro Make Canada Safe Again, pro balanced budget, &...BEST of all, Pro Western Civilization and a fighter for our values. @FaithGoldy will not be silenced.

Here's some quotes from Faith Goldy, the Toronto mayoral candidate he endorsed yesterday.

Goldy believes the white race is in the later stages of ‘ethnocide,’ in which non-white cabals are purposefully and systematically snuffing out those of the Caucasian persuasion. ... “Canada’s southern border is in a state of absolute crisis,” Goldy breathlessly intoned in a dispatch entitled “Canada’s illegal invasion”– just as the number of migrants from the U.S. began decreasing, according to Immigration, Refugees and Citizenship Canada.

Goldy has also appeared on a podcast hosted by one of the most notorious white supremacists in the U.S.; she recited (on camera, while giggling) the white supremacist ‘14 words’ trope about securing a future for the white race; she believes the 2016 shooting in a Quebec City mosque was a Muslim conspiracy; and she favourably quoted the work of a Romanian fascist who called for the elimination of the Jewish race.

Daniel Dale: "This is arguably the most explicit King has been in his support for white nationalism, though he’s been unsubtle for a while. He continues to be treated by Ryan, Trump and the rest of the party as a member in good standing."