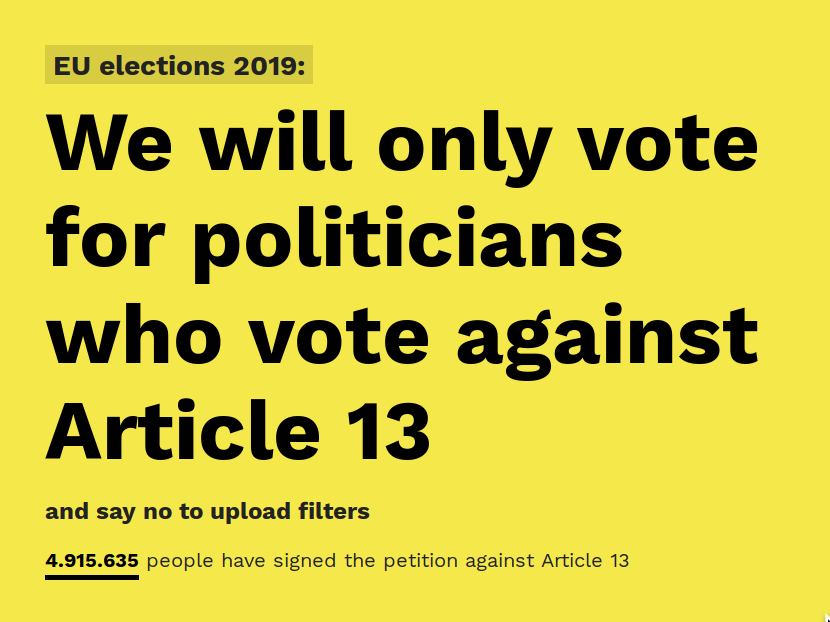 On March 23, Europeans will take to the streets to demand that Members of the European Parliament vote against Article 13, the part of the upcoming Copyright Directive that will replace the internet with a "filternet" where you aren't allowed to write, post, or say anything that might be a match for a copyrighted work, and where small, EU-based tech platforms will be snuffed out, leaving nothing but US Big Tech sitting in judgment of the continent's discourse.

Article 13 has turned the Copyright Directive into the most unpopular measure in European history (the petition opposing it is only hours away from becoming the most popular petition in the history of the human race). The corporations and politicians who support it have a hard battle to pass it, and they've pulled out all the stops, stooping to raw disinformation campaigns and ad hominem smears to advance their cause.

Breaking: @ManfredWeber and the @EPPGroup want the vote on #Article13 and the Copyright Directive moved ahead to next week to pre-empt the #SaveYourInternet/#StopACTA2 protests! We need a public outcry to stop this! pic.twitter.com/6XQSWNbgpa

But today, the Article 13 backers hit a new, undemocratic low. Manfred Weber, chair of the powerful EPP bloc in the EU Parliament, is trying to move the final vote on Article 13 to next week, ahead of the planned mass demonstrations, to help him whip Parliamentarians to vote for something that is massively unpopular just before European elections.

Here's what Europeans can do to stop him:

1. Tweet to the leaders of the blocs supporting this move:

2. Contact your MEP and tell them that you'll only vote for them or their party if they pledge not to vote for Article 13: the Pledge EU 2019 site has a fantastic set of tools to make this easy.

3. On March 23, join your fellow Europeans in continent-wide mass demonstrations to #SaveYourInternet!