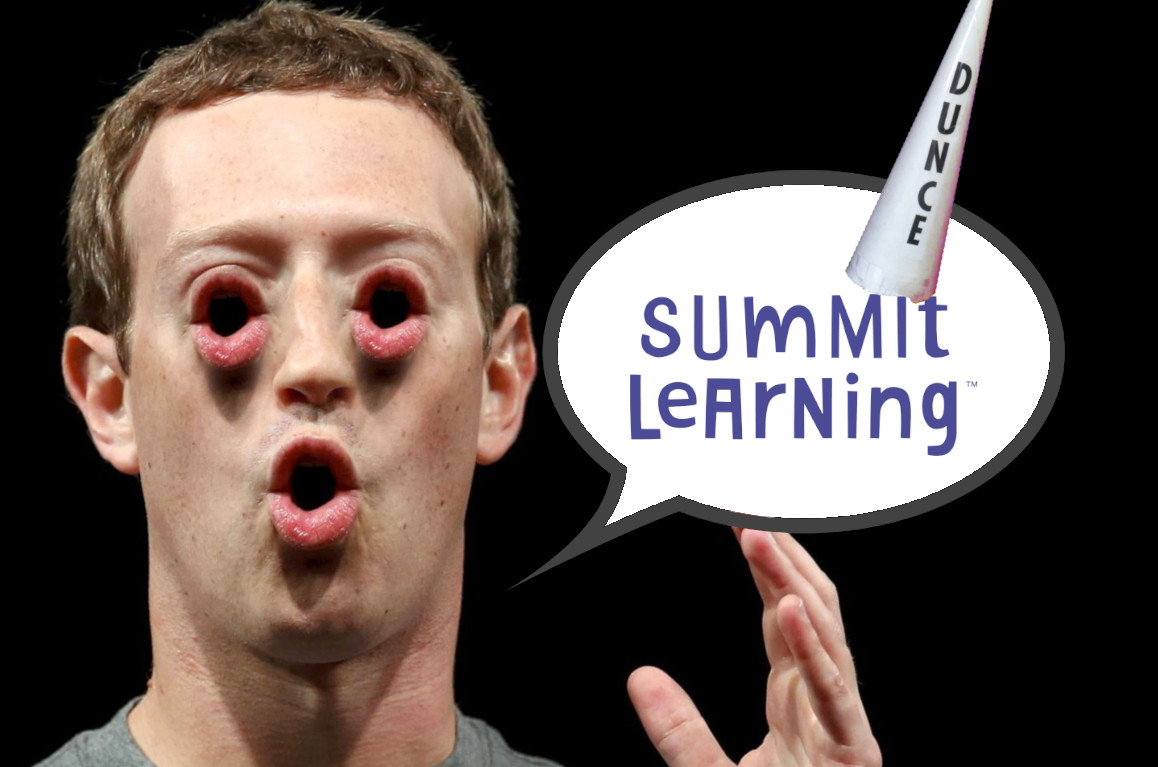 It's a high-tech version of student-led education, where a high teacher-to-pupil ratio allows students to pursue self-directed education based on their own proclivities and interests, and mentor one another. But in the Zuck version, students work alone in front of screens, in social isolation, taking automated quizzes to assess their progress.

Many students and parents find this incredibly invasive and frustrating. Students with special needs -- exactly the group that you'd expect to benefit most from "customized learning" -- find the systems especially troublesome, and for students with screen-triggered epilepsy, the systems are pure torture.

The result is rebellion, with parents withdrawing students from school altogether, or demanding that alternative accommodations be made for them; students in Brooklyn have staged mass walkouts to protest the systems; other districts have canceled the program in the face of student protests, and one University of Pennsylvania study found that 70% of students opposed the program.

US education has been the plaything of billionaires since the GW Bush era, when "accountability" measures like No Child Left Behind began to starve the neediest schools while reorienting education around preparation for high-stakes testing, all thanks to wealthy right-wing ideologues who insisted that education could be improved by "running it like a business."

Then came the charter schools, which directly integrated for-profit businesses in providing tax-funded education, supported by a coalition that welded together parents' whose public schools had been so starved that they had degraded beyond hope; religious fanatics who wanted publicly funded parochial education that omitted sexual health, evolution and other evidence-based curriculum; and wealthy people who wanted to opt their kids into racially and class-segregated environments.

Fucking with education is now the sport of oligarchs: witness the Gates' Foundation's $775 million "Big Data" boondoggle to the Sacklers' ploughing of their bloody opioid epidemic money into anti-public education campaigns and the Koch and Walton families' work to discredit teachers' unions; and then there's the queen of the education slayers, the heiress dilletante Betsy DeVos, an unqualified religious fanatic who is, incredibly, in charge of the nation's public schools, which she wants to defund from primary to postsecondary, though she will earmark funds to arm teachers with assault rifles.

Zuckerberg and Chan fit quite neatly into that rogue's gallery: using their money to elevate their evidence-free pet theories into educational policy that other peoples' kids have to test out in publicly funded laboratories.

When this school year started, children got laptops to use Summit software and curriculums. In class, they sat at the computers working through subjects from math to English to history. Teachers told students that their role was now to be a mentor.

Parents of special-needs students noticed problems immediately. Amy Jackson, a night-shift nurse in Wellington, has a daughter, Megan, 12, who has epilepsy and whose neurologist recommended she limit screen time to 30 minutes a day to reduce seizures. Since the school started using Summit, Megan has had seizures multiple times a day.

In Wellington’s town square, residents wrote their opposition to Summit on storefront windows.CreditAnna Petrow for The New York Times