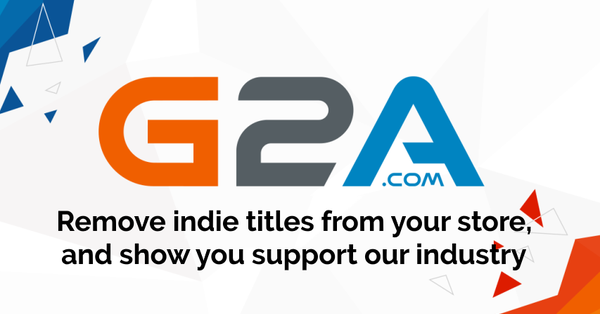 G2A is a website where people can list and sell the codes that activate software, effectively functioning as an online pawn shop for video games. It was accused lately of allowing itself to act as a clearing house for stolen codes. Many reviewers, streamers and other influencer types are given them, such is the competition among developers to market their titles, but most codes remain unused -- and therefore valuable.

Devs hate reselling platforms so much, PC Gamer reports, that they "tell people to pirate their games instead of using G2A."

G2A responded to denounce the campaign and Rose himself. It claimed ethical values of honesty and transparency, offered generous remuneration in cases of proven fraud, and insisted that stolen codes were both rare and quickly acted upon when reported. It also asserted its prerogative to drive down the price of games as far as possible:

We believe that games can be cheaper. It’s the rule of thumb: the more sellers sell a particular product, the more competitive the prices become. People come to G2A because they know they can expect deals better than anywhere else.

Today, journalist and translator Thomas Faust exposed G2A as having asked him to publish an editoral under his own byline under the condition that he disclose neither the true author or its implied offer of payment.

The title of the article: "Selling stolen keys on gaming marketplaces is pretty much impossible"

We are accused of being unethical. We have written this there article about how we're not unethical. Would you like to publish it, unethically?

you really should be thinking about whether you give a shit about the industry you're part of.

If you know an influencer who is sponsored by G2A, let them know who they are really partnered with!