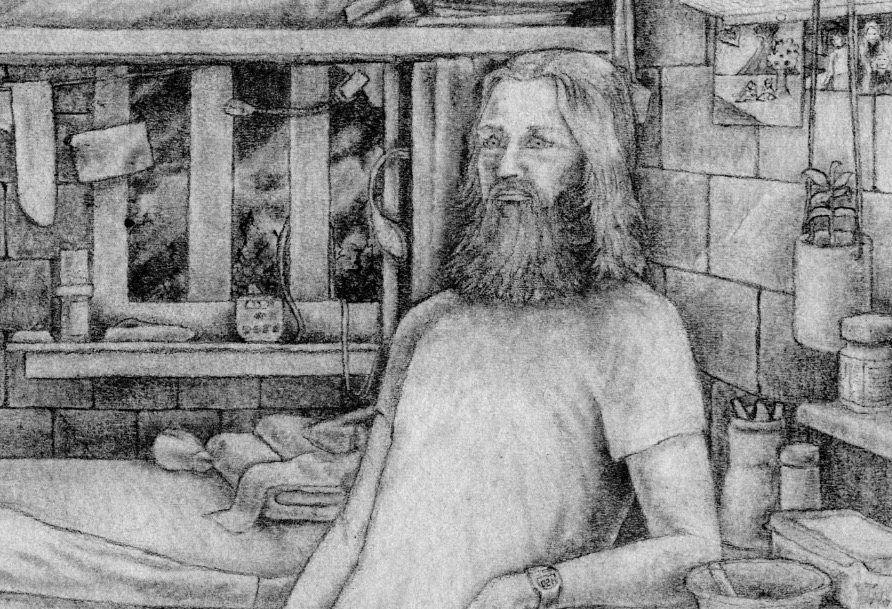 Ross Ulbricht, the creator of The Silk Road darknet marketplace, is serving a double life sentence plus forty years with no possibility for parole for "money laundering, computer hacking, conspiracy to traffic fraudulent identity documents, and conspiracy to traffic narcotics by means of the Internet." [Wikipedia] Above, a detail from his incredible drawing of his cell and cellmate at the MCC (Metropolitan Correctional Center).

In a Medium essay titled Life in a Box, Ross writes:

Try, if you can, to imagine being in this 65-square-foot cell, just you, your cellie and a pet mouse. Mail comes in and out. You get the occasion visit or phone call, but otherwise this and the prison is your universe. Now imagine living here day after day. You lay down in the bunk at night and wake up in it every morning. You eat here. Some days you weep here. Year after year, this is it. No breaks, no weekend off, and you are told you will never be let out, ever.

What can one live for under these conditions?

Surprisingly, there is much. At the very least, I know that rarefied states of mind, states of pure bliss that dedicated monks experience after many years of devotion, are available to me if I live a spiritual life in here. I know also that all the world’s knowledge is still available to me between the covers of books (some I was reading at the time I drew “Life in a Box” can be seen stacked on my bunk).

From what I can see, here are the books in Ross's cell: A book on Quantum Physics, a book called Modern A.I., Gai-Jin by James Clavell, a Math book, Sapiens by Yuval Noah Harari, a book about Salvador Dali, a Lonely Planet travel guide, No Place to Hide: Edward Snowden, the NSA, and the U.S. Surveillance State by Glenn Greenwald, and the CIA World Factbook,