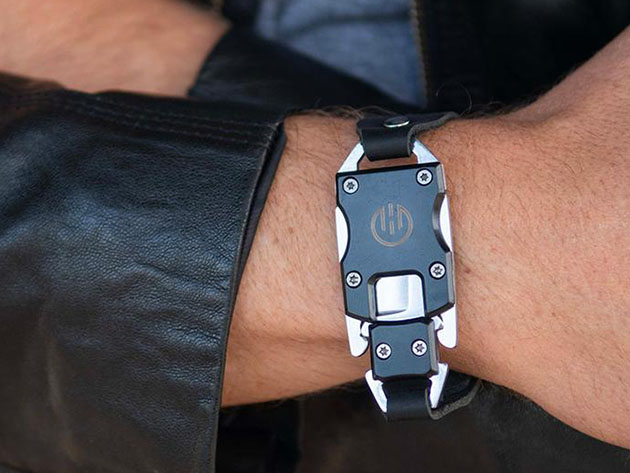 Anyone who works in the great outdoors or in a variety of fields that require the use of a good old-fashioned blade every now and then needs to have a good knife handy at all times. But walking around with a blade in your pocket all day simply isn’t practical (or safe) for most of us.

Enter the Higher Objects© Sawyer Utility Bracelet, which makes it easier than ever to safely and discreetly carry a blade in any environment.

Perfect for police, construction workers, campers, fishermen, and pretty much anyone else who needs to be able to get themselves out of a bind quickly and safely, this wearable multitool lets you fashionably carry a sharp knife and a handy screwdriver right on your wrist.

This practical and stylish accessory is perfect for conquering a wide range of odd jobs both indoors and outdoors, and it’s so light that you’ll barely notice it on your wrist when it’s not in use.

It also features a genuine leather strap that fits all wrist sizes and is made to stand the test of time—regardless of whether you primarily use your blade on camping trips or in your tool shop.

Outfit yourself with this practical and fashionable utility while it’s available for over 35% off MSRP at just $24.99.