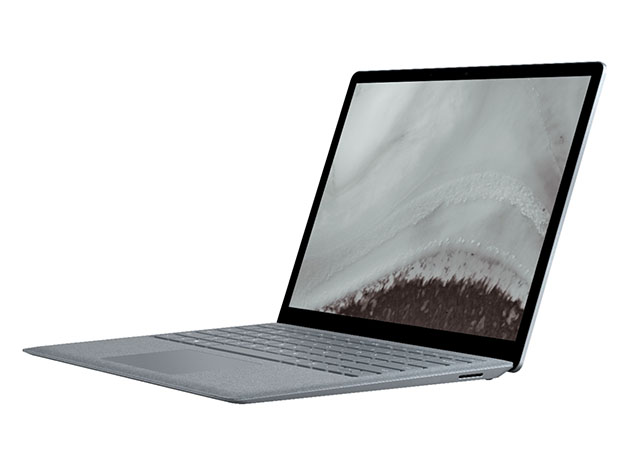 Tech moves so fast that practically the minute you lift the latest, fastest, most tricked-out new laptop on the market off the store shelf, the staff is filling that space with a newer, faster, even more, tricked-out model.

That’s just the speed of advancement — and that march is unstoppable. So instead of paying a premium for a laptop that’ll be discounted in a few months, it pays to always consider the factory-certified route. That approach nets you a recent model with comparable features to models still in their boxes, all guaranteed to work like new at a savings of hundreds off their original sticker price.

Microsoft is moving some of that open-box stock right now with a sale on factory recertified Surface 2 laptops, now more than half off their original price at just $1,199.99.

Sleek and light, with improved speed and performance, the Surface 2 is designed for multitaskers. Powered by a super-fast 8th generation Intel Core i5 processor running at 1.6GHz, this laptop has the juice to juggle multiple active apps all running at once seamlessly. With 8GB of RAM and a spacious 256GB hard drive, this is more than enough machine to handle anything from basic web-surfing and emailing to more labor-intensive app work.

Rocking a 13.5-inch PixelSense Display with an interactive touchscreen and razor-sharp resolution, it’s perfectly suited for artists and other visual creators, not to mention anyone who likes to binge a whole show on Netflix in a single sitting. And with battery life approaching 15 hours, you probably won’t even have to plug in to finish the season.

It comes loaded with Windows 10 — and weighing less than 3 pounds, it’ll probably feel like all this laptop is carrying. Its portability makes it a prime laptop for slipping into a bag or backpack for quick on-the-go use.

And just in case the factory recertified tag gives you pause, you should know Microsoft Certified Refurbished computers are all tested and certified to look and work just like new, including functionality testing, basic cleaning, inspection, and repackaging with all the needed accessories. There’s even a minimum 90-day warranty in the event you run into any issues.