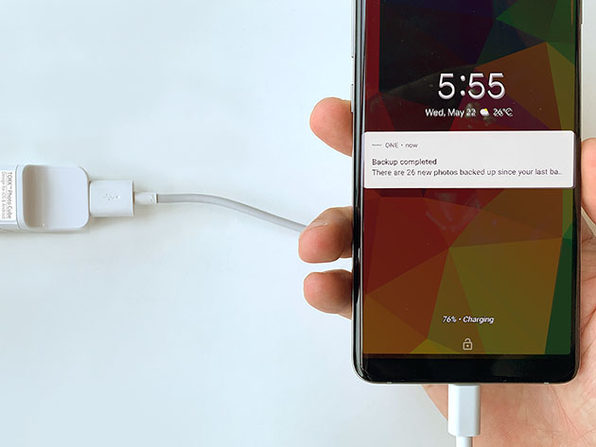 We’re all shooting heaps and heaps of smartphone images and videos. You probably even snapped a picture or captured some footage today. And that media will likely sit there on your phone until you’re startled one day to discover that your storage limit is mere megapixels away.

It’s not that backing up your data and clearing space on your device is some hated chore. It’s just a factor that never crosses your mind until you’re reminded.

Pred Technologies knows backups aren’t on the top of your to-do list. So they made the TOKK Photo Cube do that thinking for you. The trick here is that the TOKK integrates the backup process with another vital phone responsibility — and this is one you absolutely won’t forget to do: phone charging.

The TOKK attaches easily to your phone’s charging cable, so whenever you connect to power up, the backup automatically begins. The Photo Cube copies all your phone data from photos and videos to calendar alerts and contact information. The 64GB memory is spacious enough to soak uploads of new content, then sends you a reminder notification once its microSD memory card is full. After you transfer that data to a more permanent storage option, just pop the TOKK back on and the unit starts backing up again right from where it left off.

With TOKK, you’ll not only never be forced into making that rough “Sophie’s Choice” decision about which files to keep and which to delete, but you’ll never accidentally lose something you wanted so desperately wanted to keep ever again.

It’s compatible with both iOS and Android devices, so no matter what you use, there’s no excuse for running out of storage space ever again.

Right now, you pick up a TOKK Photo Cube and try it out at big savings, on sale for $30 off the regular price down to just $69.99.