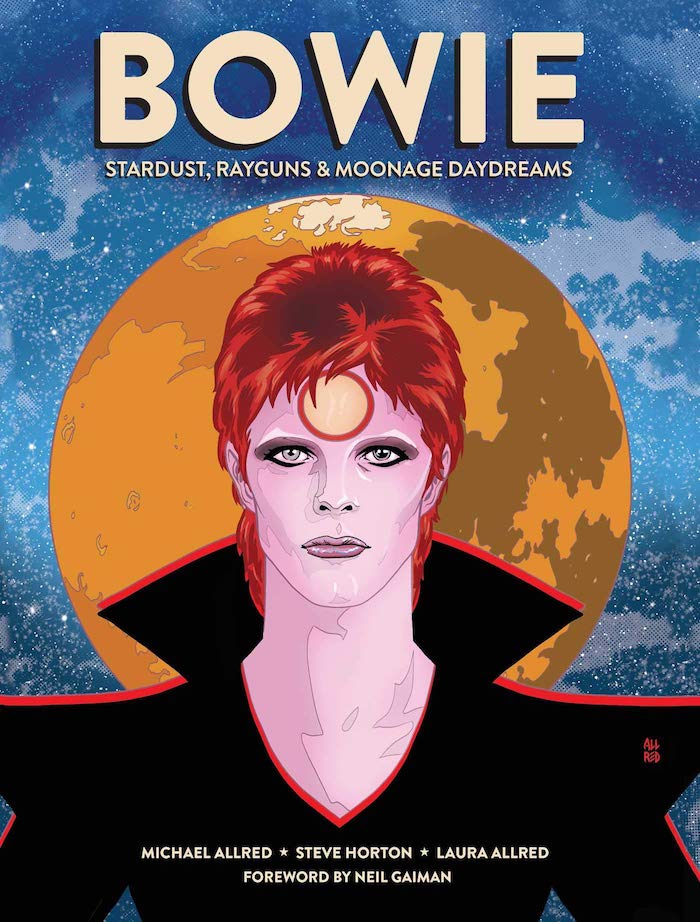 Michael Allred: It's a visual biography about how David Bowie exploded into superstardom with the invention of his Ziggy Stardust persona.  His whole life is represented, but the bulk of it focuses on the amp up to "Ziggy-Mania" with the goal to make it as visually interesting as possible, using the music and visual iconography as inspiration.

JK: How would you say music has influenced your art and sensibilities over the course of your career to date?

Michael Allred: It's massive.  Music injects imagery into my head.  It keeps me loose, lights me up, and fuels me.

JK: What's Bowie and his music meant for you?

Michael Allred: Bowie was the first musical entity I discovered on my own.  Looking for comics at the local drugstore, a rock mag with Bowie on the cover jumped out at me.  It was so compelling I bought the just-released "Rebel Rebel" single, and I was hooked.  A crash course and lifetime addiction to all things Bowie followed.

JK: What are your favorite Bowie songs and albums?

Michael Allred: After buying that first single I started with the Diamond Dogs album and bought everything leading up to that with my paper route money all in a very short period of time.  So I experienced Space Oddity, The Man Who Sold the World, Hunky Dory, Ziggy Stardust, Aladdin Sane, Pin-Ups, and Diamond Dogs in one gigantic mad tidal wave.  Because of that obsessive repeating marathon, that era has the most sentimental power.  But every album and era after was always an exciting treat, happy to follow the breadcrumbs to wherever Bowie was going.

Michael Allred: Well, Diamond Dogs. It's just so freaky, like a bizarre dream.

Aladdin Sane is the most iconic, with the bolt painted across his face.  But I'd knock that one off my top three because it's so ever-present.

I'd go with Ziggy Stardust for its haunting candid vibe.  It creates a story with this small figure, supposedly a rock star from another planet all alone on a cluttered London street at night.  The eerie photo of him lit up in a phone box on the back adds to the enigma.

So for my third pick, I'd probably go with Station to Station because of the still from The Man Who Fell to Earth.  He took the "alien trapped on Earth" thing to a masterful level with the greatest casting coup for a rock star turned actor.  And it just perfectly captures the vibe of that killer album.

JK: Your wife, Laura, was colorist on the graphic novel.  Please share your thoughts on the importance of her color artistry to both the art and story in BOWIE: Stardust, Rayguns & Moonage Daydreams.

Michael Allred: It's infinitely priceless. She's my secret weapon.  Our son, Han, helped her out with some flatting too. One of my main motivations is the excitement I personally feel anticipating the colors!

JK: What does creative joy mean for you, as an artist?