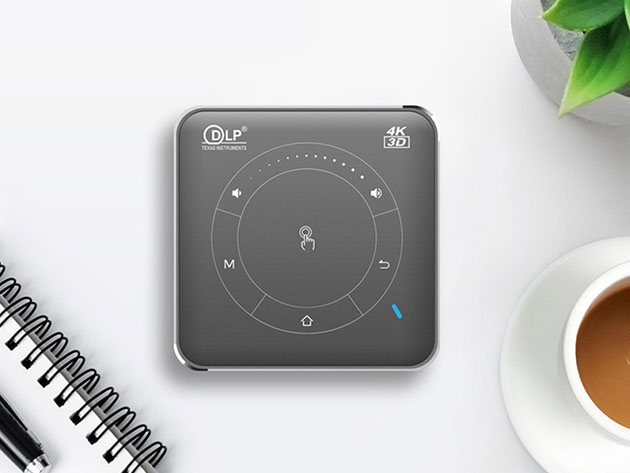 Not too long ago, projectors were those rickety old reel-to-reel devices that projected actual film. Now, projectors are as high tech as they come, and portable units are not only capable of serving as full-service on-the-go multimedia display systems, they’re also small enough to actually be truly portable.

It’s a lot of functionality to pack into a device that could slide easily into your back pocket -- and now, it can even convert your tiny smartphone screen into an image 10 feet wide with the Kinkoo 4K HD Pocket Projector for Android 9.0.

Weighing under a pound, this projector’s compact and lightweight design allows users to take it virtually anywhere for entertainment or professional use on the road, at a friend’s house, or during a business meeting.

This unit is about as simple to operate as they come. Just connect your phone via Bluetooth or the Miracast Mirror Display function, and this projector beams your phone screen on to any surface in full HD resolution at up to 120 inches across. It even works for projecting 3D video images with no distortion.

With a full charge, this projector’s LED 50 ANSI Lumens light source will shine for up to 90 minutes. And, the bulb itself is capable of running for about 20,000 hours without needing a replacement.

As for content, the Pocket Projector has all the biggest and most popular video file formats covered at up to 4K resolution, able to show H.265, H.264, MPEG4, WMV, and more with no problem. It’ll playback all your favorite MP3, WAV, FLAC, and other audio formats, as well as display all your JPG, PNG, or BMP images too.

Find the wall space you need, fire up the unit, and enjoy. You can control your image using the touch panel on the projector itself or with the included remote control. You’ll also receive a tripod so you can always set up your projector at just the angle you like.