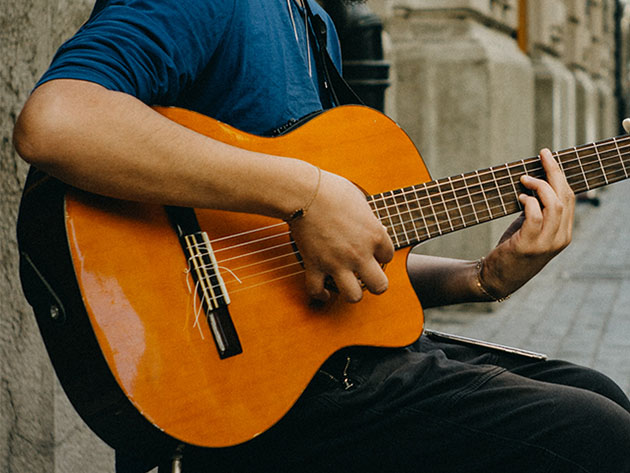 "The guitar has a kind of grit and excitement possessed by nothing else." – Brian May

If someone was assigned to turn raw sexiness into an actual, physical real-world object, it would have to be a guitar. The sound. The fit. The swagger. The allure. The longing. It's all right there in 38 inches and those six magical strings.

Learning to become a guitar hero is the dream of any kid who has ever seen a performance and wanted to bask in that kind of artistry and fame. And even if you don't dream of the spotlight, the expression and therapeutic nature of playing has its own benefits. With the training found in The Complete Learn to Master the Guitar Bundle, anyone can take some time and learn how to play.

And this is no simple bland tutorial. This collection features 14 different courses that can help even a complete guitar novice start learning the basics, then progress into understanding a host of different playing styles and even the music theory that drives every classic song.

Even if you don't know a guitar pick from a nose pick, this package gets you started the right way, including four beginner courses in acoustic, rock, and blues guitar playing that will run you through all the basics.

After learning how to master the fretboard in six easy steps and even some simple strumming patterns, you'll be off and running. From there, you'll move into improving your technique, learning exercises to help your hands move with more speed and efficiency between chords.

And speaking of chords, you'll also find coursework that focuses on understanding chord progressions and even some of those three-chord-only garage band classics that you can start playing quickly.

Finally, your training will also extend to the music itself, including music theory courses and how to develop your ear to play songs yourself after just hearing them. Heck, there's even training here to have you picking up a ukulele and playing like a boss.