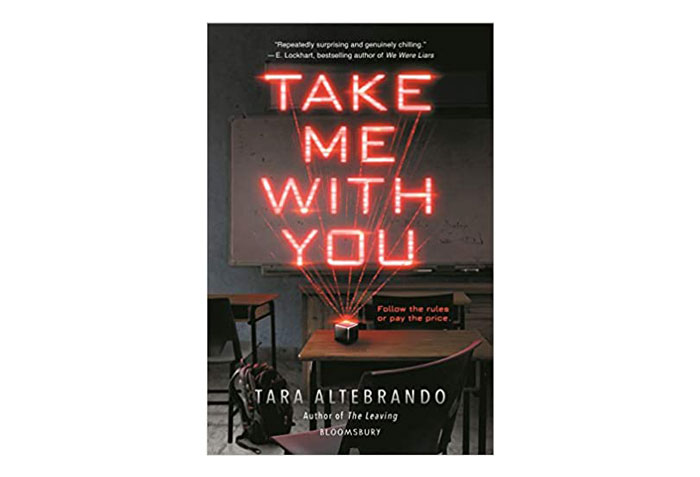 [This is a guest post from Tara Altebrando, who has a new sci-fi thriller out, called Take Me With You. — Mark]

It's always nerve-wracking when the first review of your newest novel appears in your inbox. It's particularly terrifying when that review is from a publication whose anonymous reviewers are not known for their tendency toward high praise. So when I clicked through an email from my editor and saw that this particular anonymous reviewer liked my YA thriller Take Me With You—"Hurray!" said my editor—I was pleasantly surprised. And then just plain surprised…because they tagged the book as "Science Fiction."

I actually said to my husband, "How on earth did I become a science fiction writer?"

But upon reflection, it's not as crazy as I first thought. Yes, I spent a lot of my YA career writing solidly contemporary realistic YA. Way back in 2005, my first YA, The Pursuit of Happiness, was a textbook, semi-autobiographical coming of age story. As recently as 2013, Sara Zarr and I coauthored Roomies, which is firmly grounded in the reality of two-college bound teens. Even my 2015 book The Leaving could technically be thought of as contemporary realistic in that it could maybe happen…but not really…so maybe that's when I started to delude myself.

The Leaving tells the story of six children who disappear when they're five years old then return (well, five of them do) when they're sixteen with no memory of where they've been. This is fiction, certainly; and the book is loaded up with actual memory science. But perhaps because the main action occurs in vaguely recent-day Florida—in a world that is very familiar—no one ever called the book "science fiction."

Funnily enough, a science fiction story factors heavily in the actual plot of The Leaving. The characters discover a copy of an old—and eerily relevant— sci-fi novel called The Leaving as they look for clues as to what happened to them. It's a book that's just lying around, basically, in one character's house…the way I realize a lot of sci-fi books were just there for me when I was a kid. They were on my parents' nightstands or on the shelves of the master bedroom in my grandparents' beach bungalow—maybe on my older brother's desk. I don't even know who in my family read Lost Horizon by James Hilton before I picked it up but his Shangri-La fantasy captivated me; I spent countless hours daydreaming about being on a plane that crashed in a weirdly utopian community. I have no idea how I ended up riveted by Robert A. Heinlein's Stranger in a Strange Land or why we had Motel of the Mysteries kicking around but these stories haunted me in ways that realistic novels and classic fantasy stories didn't. There was a little bit more fear involved in the process of reading about unknown worlds or futures and I liked it. When asked about my childhood reading habits, I've always said that I grew up on Nancy Drew and Agatha Christie and Judy Blume…and I did…but it's also true that some of the stories that most stayed with me were from other worlds and genres. They were the stories that genuinely scared me.

When I got the idea to write a book about a creepy device that starts generating rules for a group of isolated teens, the sci-fi bell probably should have started ringing in my head. Loudly. But even as I described the idea to my husband and kids early on—I said the device was "like a Gremlin!" and that the book was The Breakfast Club with an AI twist—I still wasn't thinking sci-fi. Again the action is grounded in our time, our reality—in my Queens, NY, neighborhood—and also, the way I saw it, many many teens these days are at the beck and call of their devices anyway. How far from reality does a story have to be to be considered science fiction? And doesn't an author need to know they're writing science fiction in order to do it?

Not far, it turns out. And apparently not.

So now that science fiction has snuck back into my life—and seeped into my work—I accept the "science fiction writer" mantel proudly. I may have been a little slow on the uptake but now I'm thinking it's almost likely that my next book will be solidly, no-doubt-about-it science fiction.

Maybe I'll even know that when I sit down to write it.

Take Me With You four teenagers find themselves in possession of a mysterious device that says they must follow its rules…or else. The more the device learns and "grows," the more the four rebel—until they find out just what the device is capable of. A startling look at the reliance and consequences of technology and data mining, Take Me With You will stay with you long after you leave its pages.

Super weird. Sound up. Video and music by Ghoul Skool of Everything Is Terrible! Thank you, The Memory Hole.