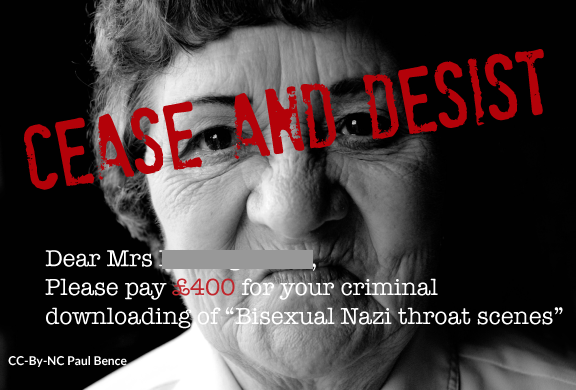 Jim from the UK Open Rights Group writes, "Why has the UK's Digital Economy Bill been drafted to criminalise file sharing and minor online copyright infringements? The government said they just wanted to bring online infringement into line with 'real world' fake DVD offences. However, that isn't how they offence is drawn up: and the government has now been told in Parliament twice that they are both criminalising minor infringements and helping copyright trolls." Read the rest

Jim from Open Rights Group sez, "MPs have worked out that attempts to verify adult's ages won't stop children from accessing other pornographic websites: so their proposed answer is to start censoring these websites." Read the rest

Back in 2010, on the last day of the last Labour government, a whipped Parliament voted in the terrible Digital Economy Act, after a short, embarrassingly illiterate debate whose howlers demonstrated just how little the MPs understood about the law they were voting in (the whole process was later revealed to be a fix from day one). Read the rest

The UK Open Rights Group has released a report on the way that the UK government approaches copyright policy, in the wake of the government's recent plaudits for the UK film industry's online offering. This matters because the UK government's position is that the film industry constitutes a major part of the British economy, and it has done everything it can to present legitimate avenues for watching film online, so the ongoing illegal download problems mean that government must intervene with extraordinary measures like a national censorship regime that blocks websites that the film industry dislikes.

But ORG's research, along with Freedom of Information requests, show that, on the one hand, the film industry's online offerings are overpriced and underserviced; and on the other hand, there is no evidence to support the claim that the industry is suffering as a result of "piracy." The "evidence" in the government's web-blocking plans is purely anaecdotal, self-serving, and belied by actual facts.

* Excluding iTunes, only 27% of the BAFTA Best Film award winning films from 1960 to 2011 are available to rent or buy online, with only 29% of the50 best British films. * Only 6% of the best 50 best British films are on Film4 OD or Virgin Media. 14% are available through a LoveFilm subscription and 4% through pay per view on LoveFilm. * Including iTunes, still only 43% of the top 50 British films can be bought or rented online, with the figure at 58% for the BAFTA Best Film award winners.

Here's a great and engrossing profile in the Guardian of campaigning MP Tom Watson, who has been instrumental in Parliament's pursuit of the Murdoch phone-hacking case. Watson has been targetted by News International in retaliation, followed around by PIs, his neighbours' rubbish bins raided, members of his party told to sideline or fire him by high-ranking News execs. I know Tom from his exemplary work against the Digital Economy Act, and it was fascinating to learn about this other major passionate campaign of his life.

"When Myler and Crone first turned up, my knowledge was novice-level," he says. "I knew about three facts. But what I knew was that in any great scandal, you've got to follow the money. They were hick, amateur questions: I think I opened with: 'When did you tell Rupert Murdoch [about the payment]?' I thought that you might as well start at the top.

"They said: 'Oh no – we didn't tell Rupert Murdoch.' Then it was, 'Well, who did you tell? Who authorised it?' Myler got frustrated me with me, because I came back to this four or five times. He ranted. And don't forget: Crone had already tried to get me off the committee. So at that point, I thought: 'You're rude, you've tried to remove me from this committee, you've put me under extreme pressure for a number of years – there's more to this, and I'm getting to the bottom of it.' "When Myler was so over the top . . .

Freedom of Information requests show that UK copyright consultation was a stitch-up; Internet disconnection rules are a foregone conclusion

Last year, the UK government held consultation into its proposed Digital Economy Act, an extremist copyright proposal created by the unelected Business Secretary Peter Mandelson. The process that followed was as dirty as any I'd ever seen (for example, the then-head of the BPI wrote an amendment proposing a national censorship regime that a LibDem Lord then introduced on his behalf. But it turns out that there was much more sleaze below the surface.

Documents released in response Freedom of Information requests show that Mandelson had already made up his mind from the start about the Act's most controversial section: the rules that said that users would have their Internet connections terminated if enough unsubstantiated infringement claims were made against their households. The "compromise" that the Act made was to suspend this measure initially, and bring it into force if the other measures in the Act failed to substantially reduce infringement. Critics called it the sham it was, saying that a 70 percent reduction in file-sharing was a delusional target, and the FOI documents show that the Act's supporters agreed -- they only intended the compromise as a means of smuggling in France-style disconnections.

Which is to say that the whole business was a sham: the Business Secretary and his pals in the record industry had stitched the whole thing up from the start, and the thousands upon thousands of Britons who wrote in never had a hope of changing things. That's why the Act was crammed through Parliament without debate in the "wash-up," hours before Labour dissolved the government. Read the rest