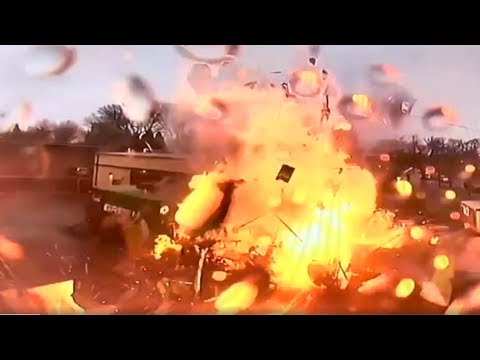 In Eugene, Oregon yesterday, the Buck Buck Food Cart exploded in a spectacular fireball due to a malfunctioning gas line. Fortunately, nobody was injured. From the Register-Guard:

A battalion chief said three additional buildings suffered damage from the blast, including (the nearby Oakshire Brewing Public House).

Buck Buck owner Mikey Lawrence, who also owns the Black Wolf Supper Club on Willamette Street, said he woke up to a number of calls and texts informing him that the food cart had exploded. Buck Buck sells fried chicken and other southern specialties.

“I live close by so I rode over, waited for the train to pass and then saw it,” Lawrence said at the scene. “And I said, ‘Holy moly.’ Well, it wasn’t as nice as ‘Holy moly,’ but it was quite a shock.”