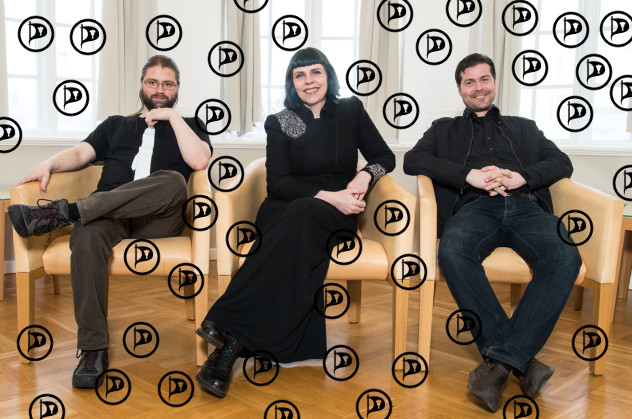 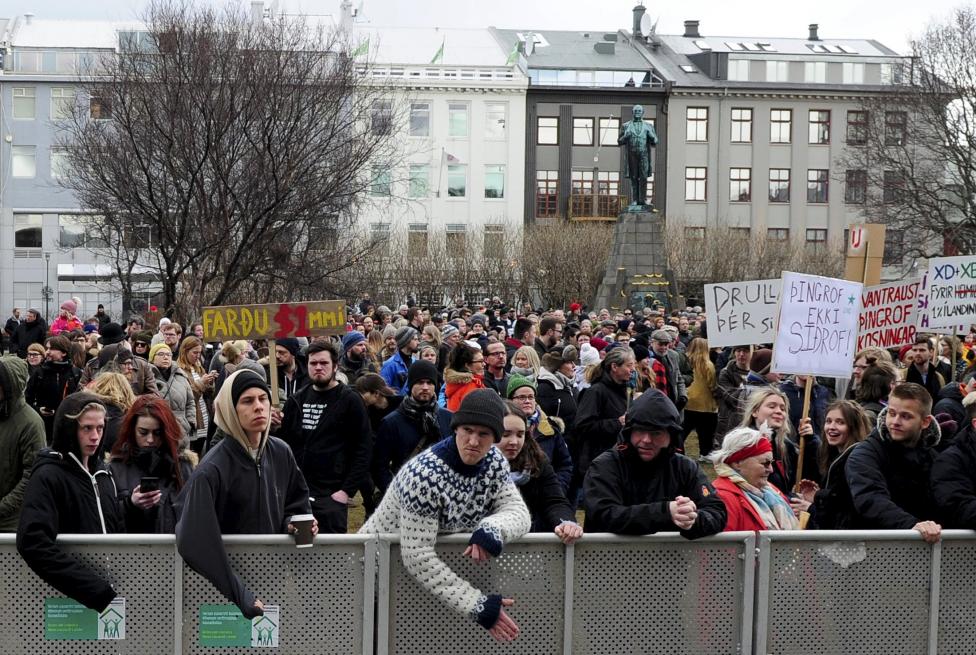 With Iceland's Prime Minister stepping down over revelations of his financial secrets, thanks to the Panama Papers, many assumed that elections couldn't be far behind -- and if the recent polls could be relied upon, the Icelandic Pirate Party would form the next government. Read the rest

If Iceland held its elections today, the Pirate Party would win 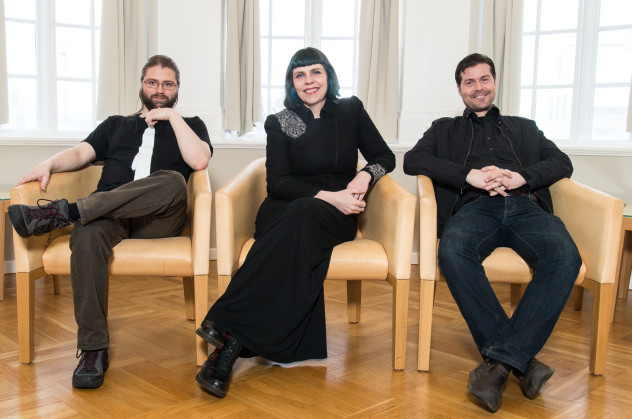 Pirate Party MP Birgitta Jonsdottir has long sat in the Icelandic parliament, later joined by two more MPs, being part of the reform movement that has repudiated the Icelandic establishment, which helped drive the planet to the brink of ruin through corrupt banking practices. Read the rest

German MEP Julia Reda's brilliant recommendations for reforming EU copyright have passed the European Parliament, and the dastardly attempt to make it illegal to take "commercial" photos in public places has been killed. Read the rest

Save copyright reform in the EU!

Alex writes, "Copyright in Europe is broken. Your rights often end at national borders and the laws are not up to date with the Internet and our current habits." Read the rest

The Icelandic Pirate Party is out-polling all the country's other parties, with 24% of the population backing them. Read the rest

A reader writes: "The UK Pirate Party is launching their 2015 crowdsourced policy platform for their manifesto leading to the 2015 general election." Read the rest

They put a Pirate Party MEP in charge of EU copyright reform: you won't believe awesomesauce that followed

Julia Reda, the sharp-as-a-tack Member of the European Parliament for the German Pirate Party, has just tendered her draft report on copyright reform in the EU. It is full of amazingly sensible suggestions. Read the rest

Celebrate yesterday's news that the NSA classes all Tor users as "extremists" and targets them for indefinite, deep surveillance...with fashion! Read the rest

Peter "brokep" Sunde -- who co-founded The Pirate Bay and founded Flattr, a system for allowing fans to directly pay the artists they love -- is standing for the European Parliament in Finland on behalf of the Finnish Pirate Party. Sunde was raised in Sweden, but has Finnish roots, and is able to run there. His platform sounds like an admirable and sensible one, and my personal experience of him is that he's a good, thoughtful and honorable person. If I were in Finland, he'd have my vote:

“Non-commercial file sharing should of course become legal and protected, and must re-think copyright all together. Copyright is not the thing that makes ARTISTS money, it’s only for their brokers and distributors,” Sunde says.

“I’d rather see us sponsor culture by pushing more money to music education, and facilities for your people to create music. It would be much more sane for cultural advancement then extending copyrights.”

If elected Sunde hopes to be aggressive rather than defensive. This means not just responding to treats to Internet freedom, such as ACTA, but ensuring that this type of legislation doesn’t even make it onto the political agenda in the first place.

“I think there’s a huge possibility for us to impact the EU and I would like to be part of it,” Sunde says.

The Pirates are delighted to have the Pirate Bay founder on board. Harri Kivistö, chairman of the the Finnish Pirate Party, says that Sunde’s candidacy will raise the visibility of the party during the upcoming election.

The Icelandic Pirate Party has won three seats in its national Parliament in the Pirates' best-ever showing on the world stage. They form a small part of the opposition to the "center-right" Independence Party (Americans, please note that the Independence Party would be considered socialists by present US mainstream political standards). One of the new Pirate parliamentarians is Birgitta Jónsdóttir, the Icelandic MP who volunteered for, and campaigned for Wikileaks. The Icelandic Pirate Party is only five nine months old!

The three new Icelandic lawmakers include Jón Þór Ólafsson, a business administration student at the University of Iceland; Helgi Hrafn Gunnarsson, a computer programmer; and Birgitta Jónsdóttir, a well-known WikiLeaks volunteer and former member of parliament from 2009 to 2013.

Birgitta is also one of three activists involved in a WikiLeaks investigation currently underway in the United States. In November 2011, a district court judge found that prosecutors could compel Twitter to give up specific information on the three accounts, including IP addresses, direct messages, and other data. In January 2013, a federal appeals court in Virginia ruled (PDF) that Birgitta and the two others have no right to find out which other companies the government sought information from besides Twitter.

The trio, along with other members of Iceland’s digerati (including Smári McCarthy, who also is one of the organizers of the International Modern Media Initiative), founded the party just five months ago.

The UK Pirate Party abandoned its fight against the BPI -- Britain's answer to the RIAA -- over its proxy for reaching The Pirate Bay, which is blocked by court order in the UK. The Party's executive had been personally threatened with legal action by the BPI and couldn't afford to risk home and family fighting this fight. But other Pirate Parties took up the slack: new, unblocked Pirate Bay proxies have been established by Pirate Party Luxembourg and Pirate Party Argentina:

“Due to pressure from lobbyists, politicians all over Europe are incited to expand the censorship infrastructure to prevent freedom of expression, the right to information and the free exchange of culture. With our proxy, we help to circumvent the Internet censorship of European countries,” Luxembourg Pirate Party President Sven Clement says.

The Argentinian Pirate Party is sending a similar message, and invites those who can’t access The Pirate Bay due to blockades to use their proxy.

“We wish the UK Pirate Party best of luck in their continued fight for free access to culture and knowledge. We have put up our own Pirate Bay proxy which is accessible from anywhere in the world, including the UK and other places where it has been censored.”

See also: UK record industry spokesman wants you to know why his employers are going after Pirate Party execs personally Read the rest

Ever since the UK record labels got a court to order our national ISPs to censor The Pirate Bay, the UK Pirate Party has been offering a proxy that allows Britons to connect to the site and all the material it offers, both infringing and non-infringing.

The record industry has finally struck back. Rather than seeking an injunction against the proxy, or suing the party, it has individually sued the party's executives, seeking to personally bankrupt them and their families. It's an underhanded, unethical, and unprecedented threat to democracy -- essentially a bid to use their financial and legal might to destroy a political party itself.

There's a fundraiser, and I've given more than I can afford to it -- £500 -- because this is plain, old fashioned, corporate bullying. I don't always agree with everything the Pirate Parties do, and I'm not a member of the UKPP, but I'm glad the Pirate Party exists, and I believe that hosting a proxy to the Pirate Bay was a political act, and that the record industry has gone after the personal lives of the executive in order to terrorise people who organise against them. They mustn't be allowed to do this.

Instead of targeting just the Pirate Party, the BPI’s solicitors are now threatening legal action against six individual members. Aside from its leader Loz Kaye, the BPI also sent threats to four other members of the National Executive and the party’s head of IT.

“We had been anticipating legal action ever since I received an email from Geoff Taylor of the BPI.

International non-governmental organizations with an interest in copyright and related issues have always been admitted to the United Nations's World Intellectual Property Organization (WIPO) as observers (I was once such an accredited observer, working on behalf of the Electronic Frontier Foundation). Historically, the NGO "observers" at WIPO were industry groups, such as the motion picture lobbyists from the MPA, the record industry lobbyists from IFPI, and so on. But starting in the middle of the last decade, public interest groups like Creative Commons and EFF started to attend these meetings, adding balance and an emphasis on human rights to the treaty-making debates.

Pirate Party International satisfies every one of the criteria used to evaluate NGOs for WIPO observer status. Nevertheless, WIPO's general assembly has postponed approval of PPI's application for status. According to a report by Knowledge Ecology International founder James Love, the assembly rejected the Pirates after pressure from Switzerland, the USA, France and other EU nations:

US, Switzerland [and] France raised objections in the informal consultations, and [...] some other European countries wanted to raise objections, but found it awkward given the recent success of domestic Pirate Parties in national elections. The USA said it asked for a hold on the decision until WIPO could decide if it wanted to accept political parties as WIPO observers. One delegate said European countries were concerned that the Pirate Parties would take “political action” back home when they disagreed with positions taken by the official delegates at the WIPO meetings”

The German Pirate Party has won seats in a third federal district, taking 8.2% of the vote in Schleswig-Holstein; they're on track to win seats in a fourth state next week in Northrhine-Westphalia. TechDirt's Mike Masnick writes:

It seems clear that The Pirate Party is certainly surpassing the German Green Party as the preeminent 3rd party -- and it seems to be having an impact. As we noted, the Greens have tried to co-opt much of the Pirate Party's agenda as their own, and Germany's major political parties have started to show a much more reasoned approach to copyright as well...

Of course, it's worth noting a point that's been left out in many of the discussions about the success of the German Pirate Party: Germany has some of the worst copyright laws around, especially on issues like secondary liability. Perhaps those two things are linked... and perhaps those who keep pushing for more draconian enforcement of copyrights might want to take that into account. There's little to no evidence that such laws do anything to slow down infringement, but it sure seems to make people respect copyright law even less.

The German Pirate Party has won four seats in Saarland, one of the smallest regions in Germany, described as a "conservative area." The PP campaigned on greater transparency in government. I'm speaking at the Pirate Party Congress in Prague on April 14, and I've been giving a lot of thought to the relevance of the party and the movement it represents. This is the second state-level German election that gave seats to the Pirates, and there are two Pirate MEPs in the European Parliament. Clearly, there's something bubbling in party politics and information politics.

Strong showing for the Pirate Party in German elections