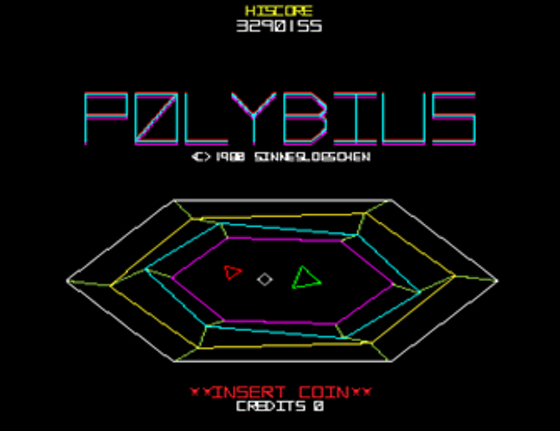 POLYBIUS: The Video Game That Doesn't Exist is an hourlong exploration of the ultimate arcade urban legend: play it, and it'll drive you insane. The documentary was made by Stuart "Ahoy" Brown, who has mastered a sternly British documentarian voice and applies it mercilessly to the subject of games. [via]

Of the various efforts to implement the legend, Jeff Minter's is surely the best, though I love the more accurate (albeit rasterized) period stylings of this vectorbeam mockup:

Jonathan Kaulay collects ten of the best. [via Alan White]

In 2005, an unopened copy of the self-deleting game surfaced on Ebay where it was promptly bought for $733,000 by a man from Japan named Yamamoto Ryuichi. Ryichi had planned to document his play through of the game on YouTube. The only video Ryuchi posted was of him staring at his computer screen and crying.