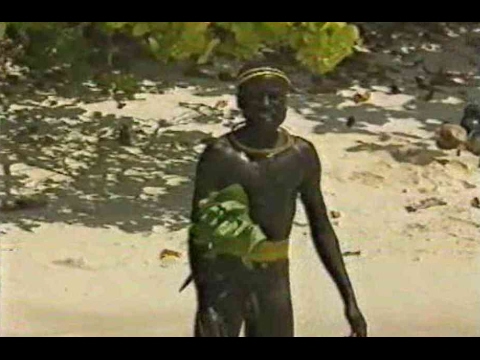 The Sentinelese are one of the world's last "uncontacted" indigenous peoples, a hunter-gatherer tribe who live on the remote North Sentinel Island in India's Andaman Islands chain. You may recall that last November, a missionary named John Allen Chau, 26, obsessed with trying to convert the tribe to Christianity, paid local fishermen to help him get near the island. As soon as he illegally landed his canoe on the shore and started preaching, the Sentinelese fired arrows. He escaped with injuries but returned twice later and was eventually killed. In a long and fascinating GQ feature, Doug Bock Clark tells the whole tale. From GQ:

From his kayak, Chau yelled in English: “My name is John. I love you, and Jesus loves you. Jesus Christ gave me authority to come to you.” Then, offering a tuna most likely caught by the ﬁshermen on the journey to the island, Chau declared: “Here is some ﬁsh!” In response, the Sentinelese socketed bamboo arrows onto bark-ﬁber bowstrings. Chau panicked. He ﬂung the gift into the bay. As the tribesmen gathered it, he turned and paddled “like I never have in my life, back to the boat.”

By the time he reached safety, though, his fear was already turning to disappointment. He swore to himself that he would return later that day. He had, after all, been planning for this moment since high school. It was his divine calling, he believed, to save the lost souls of North Sentinel Island.

And from GQ's summary of the article:

The tribe had for centuries lived in isolation there free of disease, modern technology, and Western religion, ideals, and systems.