Let go: this moving game about gravity will catch you 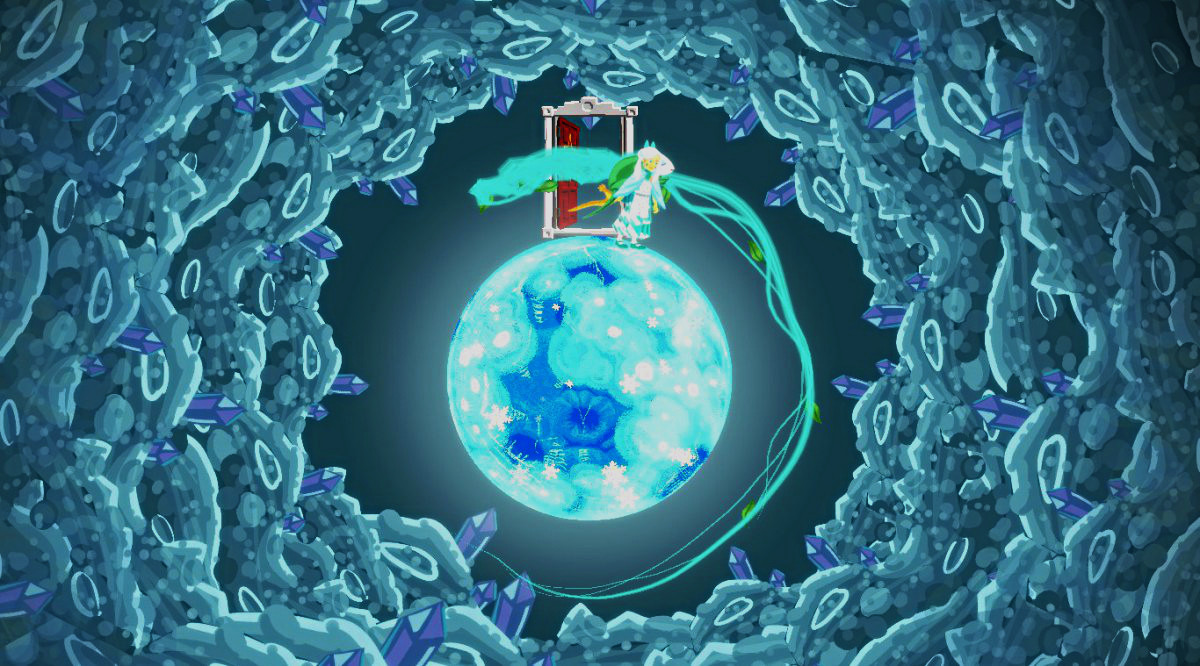 Let go: this moving game about gravity will catch you

In most games, you live or die by your reflexes. In this one, you trust the universe to catch you.

In most games, you live or die by your reflexes. Your virtual life depends on hair-trigger responses, your ability to bob and weave through each precious millisecond with physics-defying skill. As long as you react fast enough or forcefully enough, you can bend the game to your will. In Gravity Ghost, it’s the opposite. You succeed not through speed or force, but by letting go.

A uniquely eloquent and moving puzzle-solving game by Ivy Games, Gravity Ghost introduces us to a cheeky young protagonist named Iona. While she was once a very corporeal little girl, she appears to us first as a beautifully imagined ghost swirling through a galactic afterlife.

As Iona, you use the gravity of celestial objects like planets to slingshot you into the sky, where you capture the stars you need to unlock each beautifully hand-painted level. Although you learn new and different navigational skills over time, Iona always remains cheerfully in thrall to the pull of those adorable little worlds.

At first, you're set loose to explore the universe with little to no explanation, but as you ricochet off planets and soar through constellations, you also start rescuing lost animal spirits that return more and more of Iona's memories.

Soon, you realize that the world you're exploring is a crossroads, where the real physical universe and Iona’s imagination overlap. The physics of the world are not the only laws at work here; the rules and possibilities governing the game flow also from Iona’s own trusting and optimistic nature. You learn, for instance, that unlike her earthly friends and family, Iona did not fear wild animals; when others told her to be afraid, Iona opened herself up to the world.

There’s an irony baked into it all. Without giving away too much, the universe of Gravity Ghost—which always “catches” Iona when she falls—was not quite so kind to her in life. The universe you explore now is a place that finally rewards Iona’s perpetual sense of wonder, and her boundless trust that nothing will leap out and attack her. As a picture of the afterlife, it reads as an apology.

You can't die in Gravity Ghost, and you fight no ‘enemies’ in the traditional sense. Instead, you simply learn to fly and solve the puzzles created by the positioning of various celestial bodies in each level; all is in learning the fluidity of this astral dance. She trusted the world, and in turn the universe does not harm her;

The world she lives in now is a galaxy that protects her, filled with celestial animals that cuddle with her, and an airless space that allows her quips and puns to echo through eternity. As you progress, you find that this is a story not just about Iona’s courage and convictions, but also the universe’s way of saying “I’m so, so sorry.”

Although there's a charming story that runs through Gravity Ghost, it’s the controls that truly allow you to know Iona. Games communicate not just through images or words, but through the way you play them. Just as opera demands expression through the ineffable congress of instruments in the orchestra pit, the best games use the unique textures of the medium to say what characters by themselves could not. Even the mightiest Brunnhilde needs a backing of expressive trumpets; Iona needs her enchanted hair tracing elliptical orbits among the stars, yielding to the sensitive and patient movements of your hand.

My strongest moments in Gravity Ghost—the ones where I accomplished the most and pulled off the most elegant maneuvers—were the times when I made my gestures as minimal as possible. Early in the game, I found myself stuck on a puzzle where Iona spun around in orbit around a planet, trying to tap three shapes in only a few seconds. Over and over, I tried to force her to move where I wanted her to go, each time I heard the puzzle reset with the chime of failure. I started to get frustrated.

Then… I gave in. I didn’t give up, no, I just let go. I stopped trying to tightly control my orbit and instead relaxed into the gravity of the little planet that I’d been fighting this whole time. I stopped seeing Iona as a superheroine battling against an impossible power and yielded to it instead, embodying her trust and turning her into a ghostly moon swinging in the arms of a larger force.

And lo and behold, I solved the puzzle—and every other obstacle set before me—the moment I stopped struggling. There was no hurry, no clock to beat but my own. I’d find a way, gravity would find a way. Ultimately, the solution was simple: I had to stop treating Gravity Ghost like every other game I’d played.

Learning to let go and trust the world is one of the most important skills you acquire throughout the game; you have to truly inhabit Iona’s spirit as she is presented over the course of several flashbacks. Trusting, adventurous, unafraid of getting messy, never dwelling on the fear of failure.

That is Gravity Ghost's beating heart and the language it speaks. It compels you to give up some of the godlike command that most games treat as our birthright. You are by no means out of control, but what it takes to fly with Iona is a bit of her willingness to become one with the solar wind.

Put another way, this is a game where you must surrender the godlike command that most games treat as our birthright. Gravity is an uncaring force, but it need not be your enemy either; if you work with it, you succeed; if you fight it like some goblin in a dungeon, you won’t necessarily fail, but you will flail in frustration. Your expertise lies not in how quickly or often you can press a button, but how rather minimally and elegantly you can respond and still keep a little girl aloft in the night sky.

There was something about Iona's magical flight that I needed in my life right now, something about its sincerity that only motion could reveal. The more you treat Gravity Ghost like a game that wants to punish you, the harder it will be. But if you let yourself go and trace long, comet-like paths to your destination, the game becomes easier, more like an extension of your will to fly.

Somewhere in these stars, amid a bevy of cute puns (“I have discovered the Hugs-Boson!”), spectral animals, elemental powers, Swedish folk songs, and sacred geometries, you don’t simply unravel Iona’s past, but also something of yourself as you soar in her trusting, safe night sky.

After finishing the game in a single sitting, I found myself going outside and looking into the real night sky for Iona, imagining a comet’s tail of white hair streaming through the night. I reflected on what it was that Gravity Ghost’s many orbits and sacred geometry had said to me. It was something I needed to hear—and to feel—after the last seven months: smile, trust, and let go. Somehow, the universe will catch you.