Pope Francis: atheists who follow their consciences will be welcome in Heaven 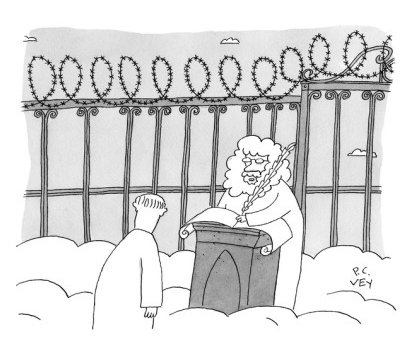 The Pope's message, contained in an open letter, is more directed to the faithful than the nonbelievers, and is a repudiation of millennias' worth of Church doctrine that equates heresy with sin.

As an atheist, I'm not really bothered about whether a Supreme Being I disbelieve in will welcome me into a place I also disbelieve in.


However, I am buoyed up by the idea of an ideology that says that those who follow their consciences are all effectively on the same side, though I'm curious about what we do when someone's conscience genuinely tells them to (e.g.) stand in the pathway of a bus filled with children who are fleeing violent, chaotic failed states, holding signs that say "RETURN TO SENDER?"

Responding to a list of questions published in the paper by Mr Scalfari, who is not a Roman Catholic, Francis wrote: "You ask me if the God of the Christians forgives those who don't believe and who don't seek the faith. I start by saying – and this is the fundamental thing – that God's mercy has no limits if you go to him with a sincere and contrite heart. The issue for those who do not believe in God is to obey their conscience.

"Sin, even for those who have no faith, exists when people disobey their conscience."

Pope Francis assures atheists: You don't have to believe in God to go to heaven
[Michael Day/The Independent]

please enjoy this video of a canterbury cathedral cat stealing the dean's milk during his morning sermon pic.twitter.com/RRIPLQGCQT — queen of bitch island (@kittynouveau) July 20, 2020 Robert Willis, Dean of Canterbury Cathedral, is delivering online sermons from the garden during the pandemic. 1 Peter 2:2 informs us that newborn babes desire the "milk of […]

Residents of Magangué, Colombia recently broke the compulsory quarantine to visit Jesus Christ who was hanging out in a tree. Praise be to pareidolia. From a El Tiempo via Google Translate: "It looks clear and everyone is praying to him and asking him to cure the land of this evil and to protect Magangué," says […]