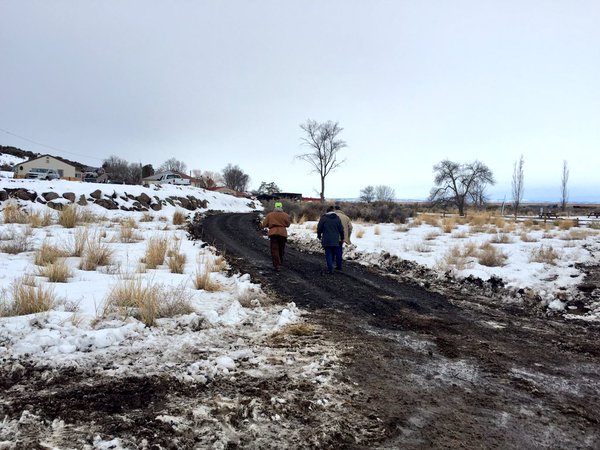 The domestic terrorists who seized the Malheur national wildlife refuge near Bend, OR, are operating with incredible impunity, destroying public property, breaking into federal databases and disrupting sites of archaeological and sacred indigenous interest.

Though the terrorists sometimes face criminal sanctions for theft of public property when they venture out of their armed compound, their ideological leader, Ammon Bundy, has been able to come and go freely from the site, even after reports of the destruction surfaced.

The terrorists have paved a new road through the refuge, over territory that is considered archaeologically significant; the reserve itself encompasses many Paiute burial sites that the band holds sacred.

The terrorists claim to be there on the Paiute's behalf. Paiute band leaders do not want their help, and are outraged at the disruption of their traditional lands by a racist terror-cell.

Regarding the wildlife refuge, the Burns Pauite Indian tribe and federal government officials said they were worried about possible damage to cultural resources, artifacts, sensitive records and local wildlife habitats.

The US Fish and Wildlife Service strongly condemned the occupiers for building the new road.

“It’s deplorable,” spokesman Jason Holm said in an email. “I’m not sure what part of the [occupiers’] interpretation of the constitution promotes the destruction and desecration of culturally significant Native American sites … This is disgusting, ghoulish behavior.”

Holm also said the fish and wildlife service had received reports that the occupiers were accessing federal records at the refuge, raising concerns about a possibly dangerous data breach. He said the government was now contracting with a data protection and credit monitoring service to safeguard refuge employees whose personal data may have been compromised.