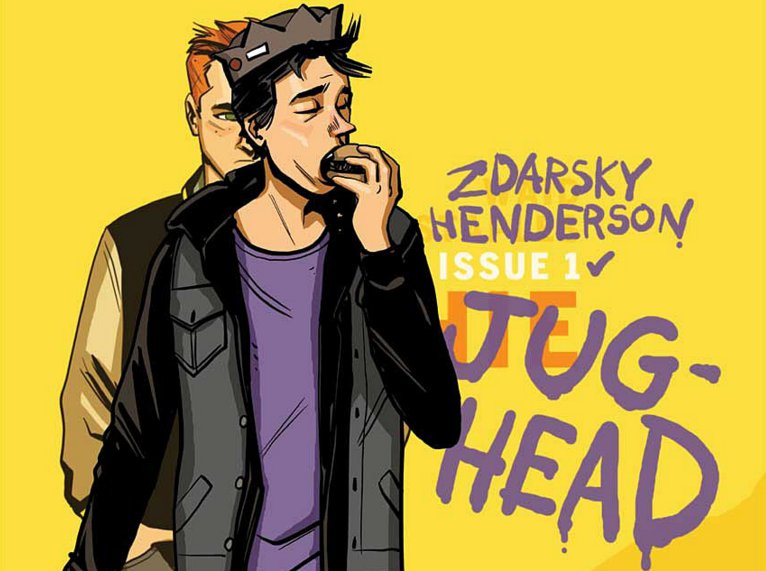 Archie Comics is on a years-long tear to reinvent Archie Andrews and his friends as a thoroughly contemporary, hilarious, and brilliant new series -- Archie has reappeared as a zombie hunter, he's got a gay friend, and lots more -- but now, Jughead has come out as asexual.

It’s one thing (and a very laudable thing, at that) for a comic company to make a character as iconic as Jughead gay, but to confirm Jughead as asexual–an identity that, because it’s still misunderstood by a large portion of society, arguably doesn’t have the same trending potential as a character coming out as gay or queer would–is pretty bad-ass. I love seeing both those examples of representation, obviously, but it’s rare to see a creative team exploring identities that are often still lumped into the plus sign at the end of LGBTQ.

Jug’s asexuality is only mentioned fleetingly in Archie #4, in the page pictured above, but, if his identity is explored further in the series, I trust the creators to do so in a way that’s respectful and extremely, extremely Jughead. Here’s Zdarsky talking to Comic Book Resources at New York Comic Con last year about Judghead’s sexuality and feelings towards women:

My view of Jughead is, over the 75 years [of his existence] there have been sporadic moments where he has dabbled in the ladies, but historically he has been portrayed as asexual. They just didn’t have a label for it, so they just called him a woman-hater.

But he’s not a misogynist — he just watches his cohorts lose their minds with hormones. People have asked me if there is going to be a romance if I’m writing Jughead, because I’m very romantic, and the answer is no, because there is enough of that in Archie. I think something like asexuality is underrepresented, and since we have a character who was asexual before people had the word for it, I’m continuing to write him that way.