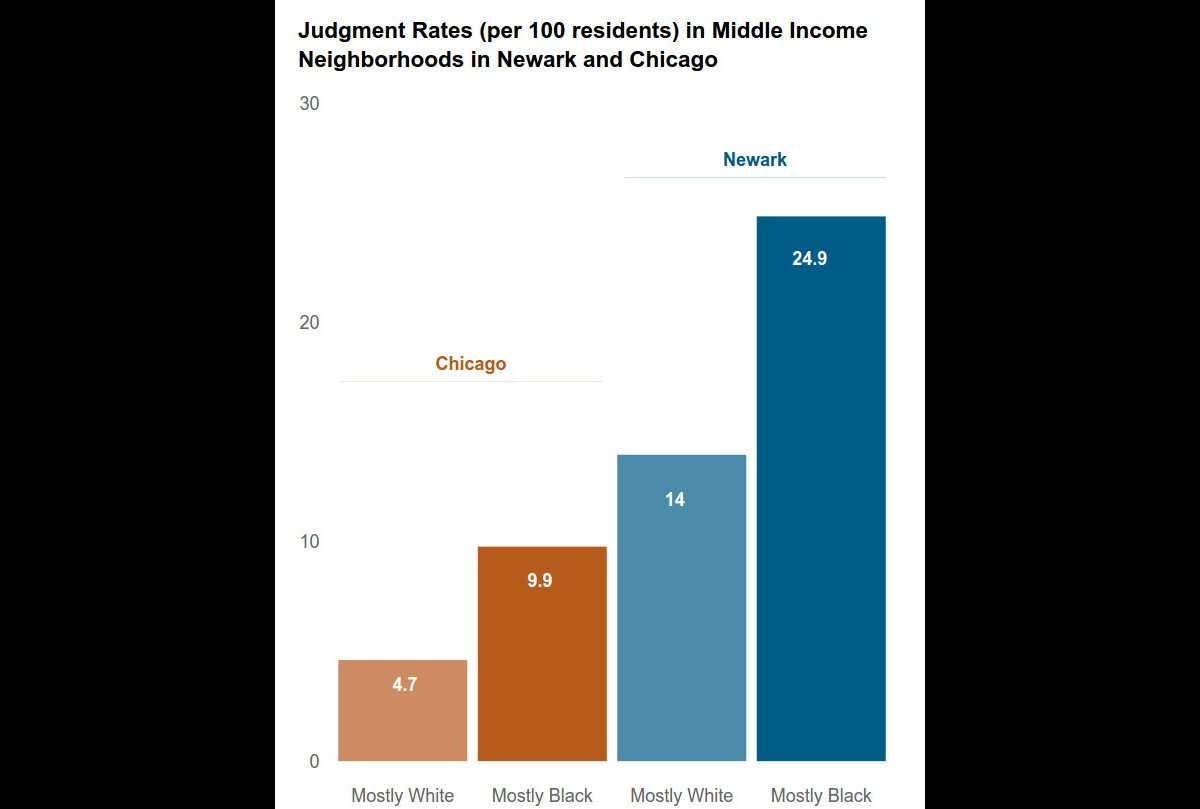 In 1996, New Jersey's courts heard 500 debt-collection cases; in 2008, they heard 140,000 cases, almost all against black people, almost all of whom were not represented by lawyers. The cases were filed by vulture capitalists who bought the debt for pennies on the dollar and employed "attorneys" who filed up to 1,000 cases a day, "reviewing" each one for about four seconds.

Propublica continues its amazing series of deep, data-driven looks at the debt-collection industry, filling in the void that confronts lawmakers as they struggle to understand the explosion of predatory practices in their states. Propublica's Paul Kiel lays out the headline findings: if your state has low filing fees, it will see more debt-collection cases; those cases will be filed overwhelmingly against black people; debt-collectors' victims have their bank accounts emptied by the thousand by debt-collectors, whose average take is a pathetic $350; the debts collected are often medical debts, and they are often collected against active-duty soldiers -- and finally, Capital One is the number one suer of its own customers among US banks.

The firms that specialize in filing debt-collection cases rely on low costs to improve their profits. To keep their costs down, they preferentially file in states with low filing fees, and minimize the amount of time attorneys spend reviewing cases prior to filing to absurd minimums: Ralph Gulko, a lawyer at Pressler & Pressler, filed up to 1,000 cases a day -- 69,000 cases in one year! His employer just paid a $1M fine for filing cases "based on unreliable information," but they insist that they did nothing wrong, and that their filing process has "always been sufficient to prevent filing errors."

Debt-collectors are represented in court by lawyers. Overwhelmingly, their prey are not. In New Jersey's 2013 debt-collection court data, over 97 percent of debt-collection defendants are without counsel.

The system is tilted in favor of debt collectors, who can readily get garnishment orders -- they have ten years to collect in this way, renewable to 20 years. When they do clean out a debtor's account, they net an average of $350, the pathetic total savings of their victims. If the amount owed is more than the amount collected, the garnishment threat continues.

Keep in mind that Nebraska has a population less than a third as large as Missouri’s. During this time period, $56 was garnished for every resident of Missouri. In Nebraska, it was $103. The difference is due to the more active role of collection agencies in Nebraska, which garnished $130 million over these years.

Nebraska’s higher number of suits can’t be explained by obvious differences such as a larger proportion of low-income families or more delinquencies. And, as Annie Waldman and I reported last year, a disproportionately high number of debt collection lawsuits are filed against black people, but only about 5 percent of Nebraska’s population is black.

So Sue Them: What We’ve Learned About the Debt Collection Lawsuit Machine
[Paul Kiel/Propublica]