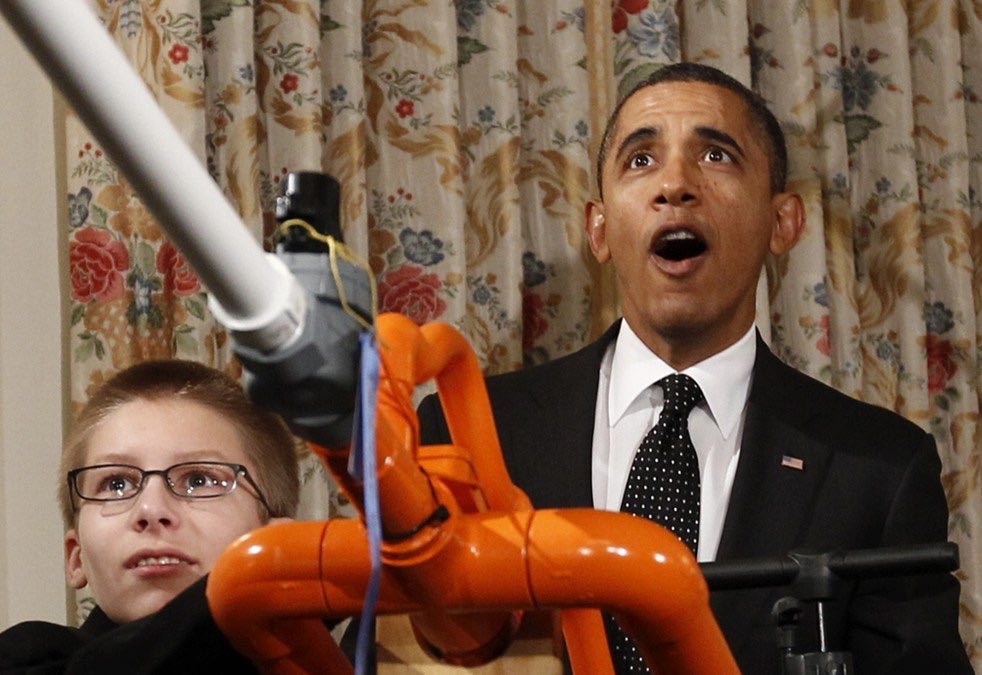 In 2009, President Obama pledged to "restore science to its rightful place." He said, "We will not just meet, but we will exceed the level achieved at the height of the space race, through policies that invest in basic and applied research, create new incentives for private innovation, promote breakthroughs in energy and medicine, and improve education in math and science."


Today, the White House released an Impact Report listing 100 things that Obama has made happen with the support of many people across research, policy, education, and, yes, maker culture. Here's the full Impact Report. A few examples from the list:

• Prioritized and encouraged broad participation in STEM education. The President’s Educate to Innovate campaign, launched in November 2009, has resulted in more than $1 billion in private investment to improve K-12 STEM education. The Nation is on track to meet the President’s January 2011 State of the Union goal to put 100,000 additional excellent STEM teachers in America’s classrooms by 2021. The President has helped showcase to students—including through events such as the White House Science Fair—that science, math, engineering, and computer programming are deeply compelling subjects that can help solve problems locally and globally.

• Fostered a nation of makers. The President hosted the first-ever White House Maker Faire; highlighted the growing importance of additive manufacturing by being the first President to be 3D scanned for his Presidential bust; and led a call to action resulting in commitments to create more than 1,000 maker spaces around the country. Under his tenure, the number of new manufacturing firms is rising for the first time in the past decade; participation in local maker events has risen ten-fold; and venture capital for hardware-focused startups is rising.


• Supported next-generation robotics. In June 2011, the Administration established the National Robotics Initiative to spur research and development in the field of robotics across an array of disciplines and applications, including healthcare, agriculture, manufacturing, space exploration, and national security. The initiative has helped catalyze more than $150 million in funding since June 2011 for innovative robotics research and development at institutions across the country. The effort has led to new collaborations and advances, including in autonomous vehicles, robotics for educational development, and robotics for disaster response. In addition, efforts such as the DARPA Robotics Challenge, which brought together 25 robotics teams from around the world in a competition to demonstrate disaster-response operations, have pushed the field forward and shown what is possible.


• Fostered a burgeoning private space sector and increased capabilities for our journey to Mars. Working with NASA, American companies have developed new spacecraft that are delivering cargo to the International Space Station (ISS) and will start ferrying astronauts there by the end of 2017. The Administration’s investments in space technology development, including through the Space Technology Mission Directorate created by NASA in 2013, are developing less-expensive capabilities for NASA’s exploration missions and for the President’s goal of a human mission to Mars in the 2030s. Due to the Administration’s leadership, ISS’s lifetime has been extended twice, and the Station is now due to continue operating until at least 2024.

"100 Examples of Putting Science in Its Rightful Place" (Thanks, Tom Kalil!)