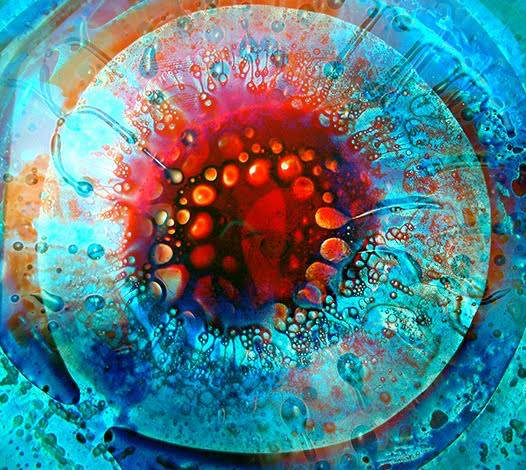 When I was a kid in the late 1960s, I briefly washed dishes and carried equipment for a light show called Garden of Delights, which was based in Sausalito, California. So it was a dream come true to interview Bill Ham, the artist behind the first light shows in 1966 at San Francisco's fabled Avalon Ballroom. Over the course of three mornings and afternoons, I spoke with Bill about how he got into light shows, the techniques that evolved from his early experiments with Elias Romero, the reactions of musicians to his work, and his years in Europe at the beginning of the 1970s, which included a stay at a French chateau with the Grateful Dead. Highlights from those conversations, clocking in at 9,000 or so words, have now been published at Collectors Weekly.

Collectors Weekly: Can you describe the techniques you were using at that time?

Ham: It started with the overhead projectors, which had been designed for lectures and presentations, so that lecturers could show their audiences diagrams, text, and other information as they spoke. Overhead projectors were used mostly in educational settings, for corporate meetings, that sort of thing. We repurposed them.

The main medium of the overhead projector had been the transparency. The light source below the projector’s flat surface, which is actually a Fresnel lens, would beam the image or words on the transparency onto a mirror above, which, in turn, aimed that image through a focusing lens and onto a screen or wall. Transparencies are dry, but we were projecting liquids, so the first things we needed to do were to protect the lens with a clear sheet of glass and then contain the liquids.

Early on, Elias had discovered that clock crystals -- the clear pieces of glass that protect a clock’s hands and other moving parts -- made good bowls for light-show liquids. They came in all shapes and sizes. Those that were deeply concave held more liquid. Others were flatter, which allowed you to do different things to the liquids. Some crystals with round bottoms could actually be spun in circles on the projector’s flat surface. And then, by setting one bowl on top of another, you could stack them up, several at a time, to produce even more effects, liquid- and color-wise.

Whatever the effect, the overhead projector was the only tool a light-show artist could use that let him actively direct the form and composition of the projection. Slide and film projectors were also used in light shows, but only the overhead projector allowed the artist to work directly with his liquid materials in a way that was truly spontaneous.