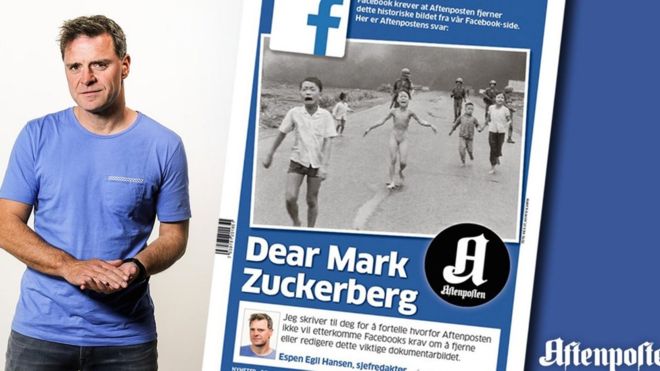 Facebook has banned one of the most famous images of the Vietnam war—then 9-year-old Kim Phuc running naked from a napalm attack on her village—for contravening the site's prohibition on "nudity." It even removed a posting of it by the Norwegian Prime Minister.

The editor of Norwegian newspaper Aftenposten said the entire post, which was about iconic war imagery, was later deleted and the account of the reporter behind it suspended.

Espen Egil Hansen has accused Mark Zuckerberg of "an abuse of power".

Facebook said it has to restrict nudity for cultural reasons.

Mr Hansen said the image of Kim Phuc, then aged nine, was removed less than 24 hours after the newspaper received a request from the firm to either take down the image or pixelate it and before it had responded.

Phuc suffered horrific burns in the attack, which she described as "a blast of heat which felt like someone had opened the door of an oven." Though it was unlikely she'd survive, journalists Nick Ut (who shot the photo) and Christopher Wain took her to hospital and she pulled through. She lives in pain to this day, and the photograph is part of the world's cultural heritage, a powerful warning of the horror of war.

Facebook's won: it doesn't have to pretend to care anymore about being the "public square" it sometimes affects to be. But let's hope it can be convinced to reconsider this one.

It's time for expectations to change, though. Nobly declaring "I shall not comply with your requirement to remove this picture" only highlights to whom publishers have ceded their power, given that Facebook already removed the picture. Take this quote from Sue Llewellyn, a social media consultant:

She also disagreed with Mark Zuckerberg's comments last month that his company is a technology firm, not a media organisation.
"You can't be a distributor of news without having editorial responsibilities," she said. "They can't keep washing their hands of it and then censoring content."

Even if we got Facebook to agree to embody ideals of free expression, even if it believed in them to the heart of its culture, its nature and vulnerability as a private corporation forces it to act in its own perceived interests when a dilemma presents itself. If you care about being able to say what you want, your only option is not to speechcrop on Facebook. If you're not prepared to leave it for commercial reasons, because it's where the market is, that's cool. But unless it's nationalized and operated as a state-run utility—as if!—Facebook will always have the last word on what you get to say on Facebook.