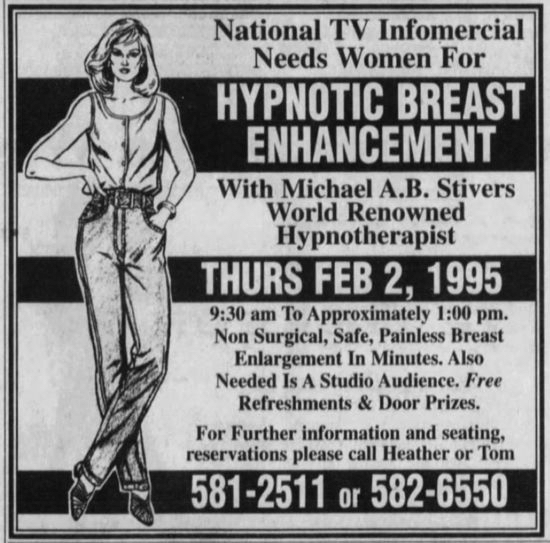 
According to his pitch, "The larger-breast style of self-hypnosis relaxes the subject, then allows her to will an increased blood flow into the fatty tissues of the breast, much like that during menstruation or pregnancy. Daily conditioning through self-hypnosis allows what amounts to a permanent enhancement."


It may comes as a surprise then that according to an article from the Des Moines Register posted by Weird Universe, not all of Stivers' customers were satisfied.


"A 58-year-old Tampa woman who wouldn't give her name said her bust measurement grew 3 inches through hypnosis in April, but then shrank 1 ½ inches," reads the article.

Bleach injections and tanning beds as treatments. The false link between 5G and COVID-19. This onslaught of bullshit claims and quackery around COVID-19 is an “infodemic,” as the World Health Organization says. In the science journal Nature, University of Alberta law professor Timothy Caulfield, the Canada research chair in health law and policy, explains why […]

Maryland Gov. Larry Hogan signed a bill into law protecting minors from “gay conversion therapy,” a bullshit, discredited, harmful “method” of trying to psychologically change a person’s sexual orientation. The new law prohibits health “professionals” from practicing the “treatment.” “I think it’s fantastic, because it will save the lives of young people in our state,” […]

Skepticblogger Orac writes about the sad saga of Fabio Lanzoni’s sister Christina’s ovarian cancer, which killed her, but with help from “University General Hospital and at the Burzynski Clinic.” It’s no accident that this hospital, which has been sued for fraud and is associated with America’s famous non-jailed cancer quack, goes by the abbreviation “UGH.”