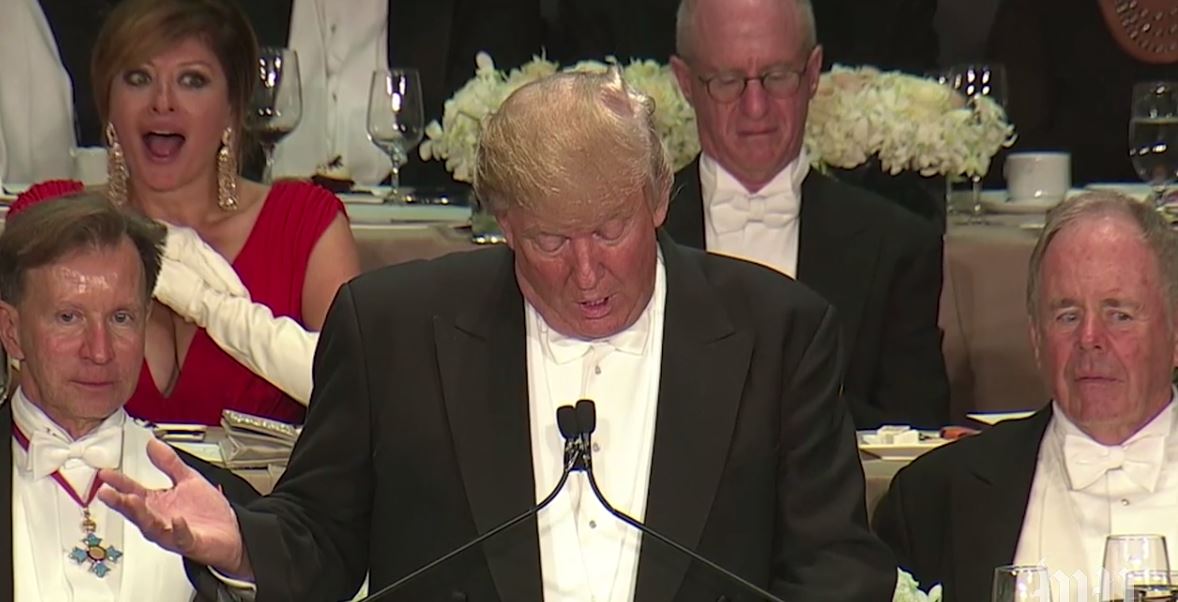 At the Alfred E. Smith Memorial Foundation white-tie event in New York last night, presidential candidates Donald Trump and Hillary Clinton sat within groping distance of one another—and delivered speeches for a largely-Catholic audience. A traditional and restrained roasting of oneself and one's opponent, the dinner speeches mark the final public event where the two will tangle before election day. And, as you may already have predicted, Donald Trump managed to get himself booed at a charity dinner.

Here's the Washington Post's cut of the best moments:

“Hillary is so corrupt, she got kicked off the Watergate Commission,” Trump said, citing a false Internet rumor as the crowd turned on him and started to boo, something that simply doesn't happen at lavish charity dinners at the Waldorf Astoria hotel. The face of one the guests sitting on the stage behind him was suddenly struck with horror.

“Hillary believes that it's vital to deceive the people by having one public policy and a totally different policy in private,” Trump said, as the booing intensified.

Trump would go on to accuse Clinton of “pretending not to hate Catholics” and mock the Clinton Foundation's work in Haiti. At one point, he wondered aloud if the crowd was booing him or Clinton, to which someone in the crowd answered: “You!”

He screwed it up because he could not restrain his spite toward his opponent, had little for himself, and wasn't very funny. Trump, though, to his credit, made a good show of taking Clinton's jabs with good humor, laughing and grinning along with everyone else (in contrast to his infamously sullen demeanor at the 2011 White House Correspondents Dinner.)

The real loser of the night? Rudy Guliani, who sat simmering like a dollar store Mussolini while Hillary dumped on him with her best line of the night.