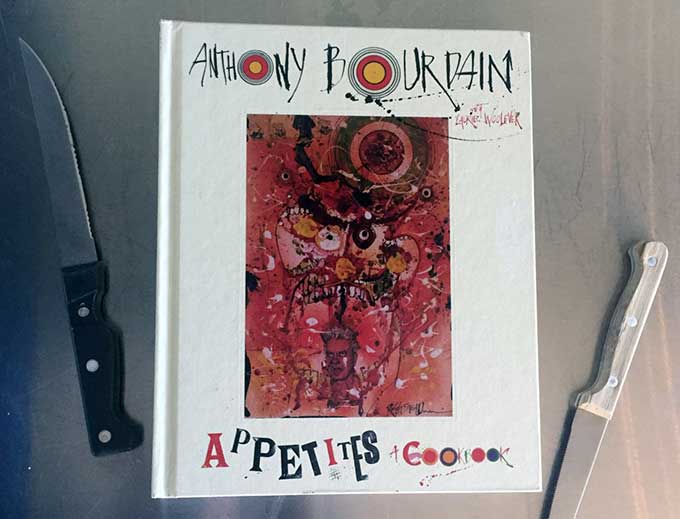 Anthony Bourdain is an idol of mine. I read his breakout book Kitchen Confidential while I was working in a dingy Teriyaki Bar. I’ve watched as he’s eaten his way around the world. I’ve read every book he’s put out. I was first-in-line to pick up his only other cookbook released more than a decade ago — a collection of recipes from his time working at New York restaurant Les Halles. But his new one, Appetites: A Cookbook, is much more personal and really captures who I imagine Anthony Bourdain to be.

The recipes are a mishmash of cuisines taken from Bourdain’s travels and experiences, they’re what he likes to eat, and what he feeds his family. You’ll find new takes on old fare, like Mac and Cheese, Buttermilk Biscuits, and Thanksgiving Dinner. Also included, are recipes for some more worldly cuisine like Saffron Risotto, Banh Mi, and Poulet “Ev Vessie” Hommage á La Mére Brazier. Just don’t expect a chocolate tart recipe, as Bourdain’s not the biggest fan of baking sweets, or as he says, “Fuck Dessert.”

On the cover of Appetites: A Cookbook is an incredible painting done by Ralph Steadman, which sets up the elegant punk rock vibe that fills the book. The food being photographed is often gristly, squiggly, and to some people “gross,” but it’s shot in a beautiful way. There are shots of his Jiu Jitsu star wife putting someone in a headlock, friend and fellow cook Eric Ripert, and lots of vivid color, making this as much of an art book as a cookbook. This is a must for fans of Bourdain, or just people who are fans of food.

Fresh Made Simple: A Naturally Delicious Way to Eat: Look, Cook, and Savor

Despite making a weekly meal plan, we eat at least one dinner a week out of the freezer and often ditch another well-planned meal for something quick and easy. Lauren K. Stine’s recipes in Fresh Made Simple are not only great for fast, fresh, mid-week eats, but also for quick, clean snacks and spreads to […]

A handbook, a cookbook, an eggbook: this quasi-encyclopedic ovarian overview is the only tome you need to own

There is something irresistibly gross about Lucky Peach food photography. The bizarre lightening and color correction, the styling that fluctuates between offbeat and grotesque. It’s so weird, it’s amazing. Aside from it’s unique visual appeal, Lucky Peach is consistently packed with culinary expertise and damn good journalism. Though the magazine will soon be gone, the […]

Say you’ve ditched your frozen dinners, gotten swept up in foodie culture, and, with new found enthusiasm, eat out and order seafood. You wax poetic about the merits of sustainable fish farming, but your smile suddenly wanes when your server brings the fish — whole. Or maybe you’re a college student embarking on your very […]