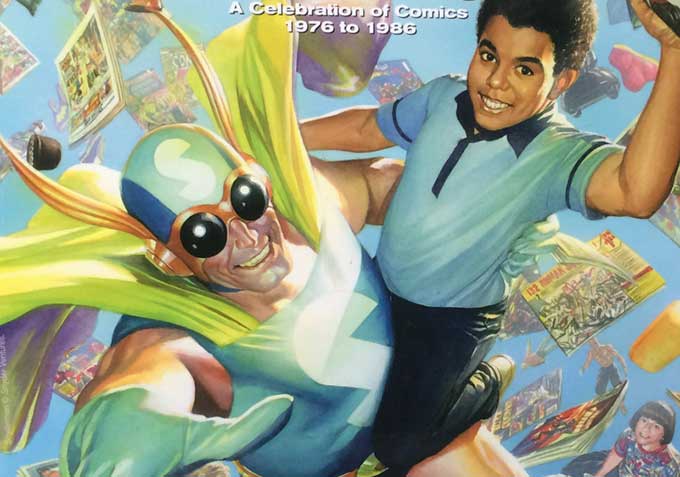 If you're an aging comic book fan, say in your late 40s or early 50s, Comic Book Fever will scratch the hell out of any nostalgic itch you've ever felt about the hobby. George Khoury's picture-heavy examination of comics and comics culture from the mid 1970s to the mid 1980s triggers a flood memories.

There are the comics themselves: Landmark runs of the X-Men, Teen Titans and Daredevil. And the artists: Frank Miller, George Perez and John Byrne. Not to mention all the ads, toys and snacks.

Heck, this book even includes a feature on Grit, the family newspaper that lured generations of comic fans into selling its tabloid door to door with the promise of cash and prizes.

There are also features on such classic stand-alone comics as Captain America's Bicentennial Battles by Jack Kirby; the first-ever DC-Marvel match-up, Superman Vs. Spider-Man, and the Neal Adams-illustrated Superman Vs. Muhammad Ali. They don't make 'em like that anymore. And that's the point.

Comic Book Fever celebrates the mass-market popularity of comics even as this popularity was starting to fade. By the end of the period covered, comics were no longer something that every kid grew up on, but a hobbyist product available only in specialist comic book shops. The industry's move to direct marketing and emerging competition from other pastimes, such as video games, spelled the end of an era. The bright side was the emergence of the independent press and creator-owned series such as Elfquest, Love and Rocket and, ahem, the Teen-Age Mutant Ninja Turtles, all also covered here.

Now, of course, superheroes are again hugely popular thanks to the movies. And comics, in the form of collected editions and graphic novels, are widely available in bookstores. But the days of sipping a Slurpee at 7-11 and plucking comic books from the spinner rack are, sadly, gone forever. With the help of this book, at least, we've still got the memories.

Jack Chick (1924 – 2016) was a cartoonist and the publisher of a series of small-format fundamentalist Christian comic books, which he called "Chick Tracts." The stories typically focused on a non-Christian who willingly or unwillingly rejected Chick's brand of hateful, conspiracy-obsessed religion and ended up going to Hell, where he was received by a […]

When I'm not writing here on BoingBoing (or anywhere else, for that matter), I also play guitar and sing in a rock band called The Roland High Life. Today we announced our new record, Songs About Comic Books and Mid-30s Malaise, and released the first single, which is kind of a Cars / Green Day mashup […]