Was this weekend a trial balloon for a coup? 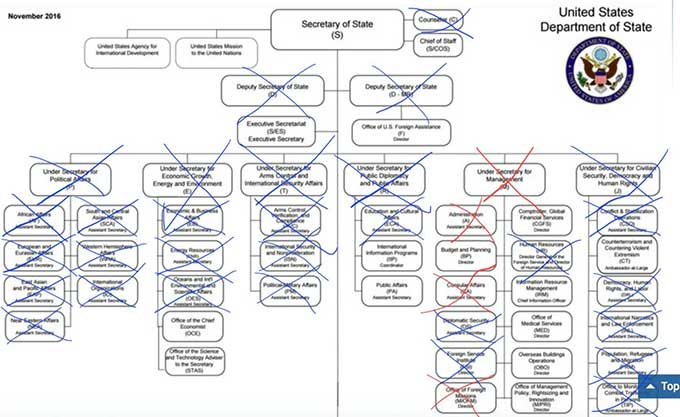 "Yesterday was the trial balloon for a coup d’état against the United States," writes Yonatan Zunger on Medium. The "administration is testing the extent to which the DHS (and other executive agencies) can act and ignore orders from the other branches of government. This is as serious as it can possibly get: all of the arguments about whether order X or Y is unconstitutional mean nothing if elements of the government are executing them and the courts are being ignored."

Combining all of these facts, we have a fairly clear picture in play.

Image above: "The seniormost staff of the Department of State. Blue X’s are unfilled positions; red X’s are positions which were purged. Note that the “filled” positions are not actually confirmed yet."

Hundreds of Nicaraguans who took to the streets over the last eight months to protest President Daniel Ortega’s corrupt government have been forced into hiding and, in some cases, to flee the country for their own safety. It’s the end result of the Nicaraguan government’s crackdown against protesters who voiced their outrage over Ortega’s plans […]

Two bedroom apartments in Phnom Penh start at $260,000 -- equivalent to 2,000 years' worth of average annual wages for Cambodia's workers.