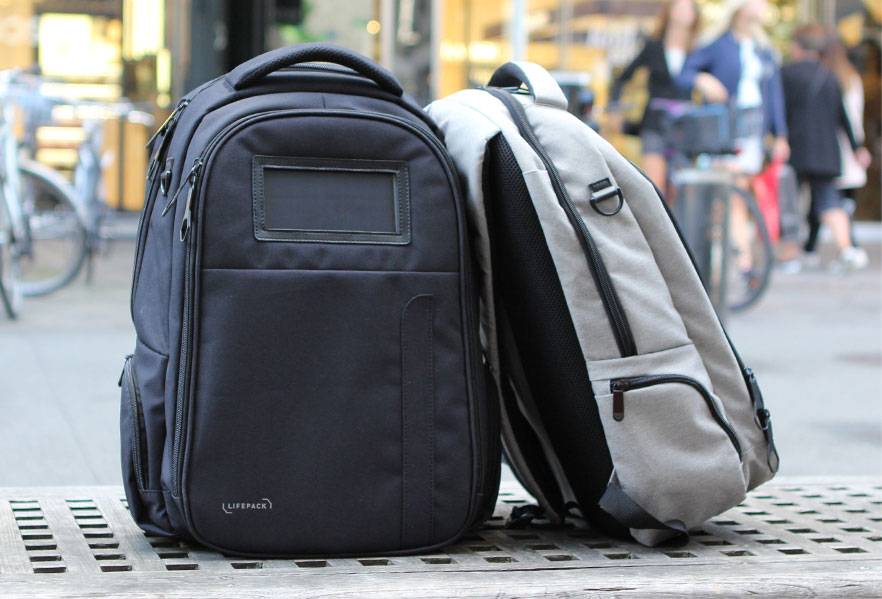 Ok, it’s not just solar powered. It’s also an anti-theft, waterproof marvel that keeps my phone’s power bar from ever getting into the red.

Sure the idea seems obvious now - tuck a gigantic solar powered battery pack into an exposed slot and turn the wearer into a walking energy harvester.  Simple maybe, but I didn't think of it.  Way to go Solgaard.

The battery brick is called the Solarbank and the backside acts as a nifty speaker that wirelessly plays tunes from my phone.

And as long as there’s direct sunlight, I can have non-stop music playback with absolutely no battery drain. I believe it'd be the perfect "trapped on a desert island device".  In fact, if Tom Hanks had one in the movie Castaway (and a brand new smartphone), he wouldn’t have needed that goofy volley ball at all.

And I know what you’re thinking.  You’re thinking my desert island concept is flawed because the sun would eventually set and its magical recharging rays will disappear. Well I can’t argue with you on that – but just imagine a life where you weren’t trapped on a desert island and followed my easy to execute 2 step plan.

Step 1) Create an autonomous vehicle that moves fast enough around the Earth so that you’re always under direct sunlight. Below is a handy illustration that explains how to gain maximum charging time with a LIFEPACK backpack.

As you can see, it all depends upon your starting latitude and your ability to stay within it as you travel. At the equator, you’d need to travel west at approximately 1650km/h to counteract the rotation speed of the Earth. As you travel towards the poles, the needed speed decreases dramatically.

Step 2) Create an algorithm that auto-coordinates your musical playlist with the regions you travel over. Flying over Poland? Why not rock out to a 30 second snippet of The Pennsylvania Polka? Tooting along over Russia? The theme song to Tetris is pretty darned relaxing.

But if you intend to forego my Rube-Goldbergian plan, you could simply charge your Solarbank once a week by plugging it into a wall outlet while you sleep.  The pack can store up to 6 phone charges and has 2 USB ports that allow for romantic charging sessions for you and your nerdy mate.

The bag has 5 secret zipper compartments for your nerdy odds and ends and there’s even a built in combination lock that will keep your computer safe from…traveling computer thieves I guess.

Look, this is the most well thought out, high-tech backpack I’ve ever seen and since the solar pack has already bailed me out of a professional jam I’m going to give the weird combination lock thing a pass.

Check out LIFEPACK. If you’re nerdy like me or stranded on a desert island, you’ll love it.

FYI - Getting Wilson's image on your LIFEPACK will be entirely up to you.