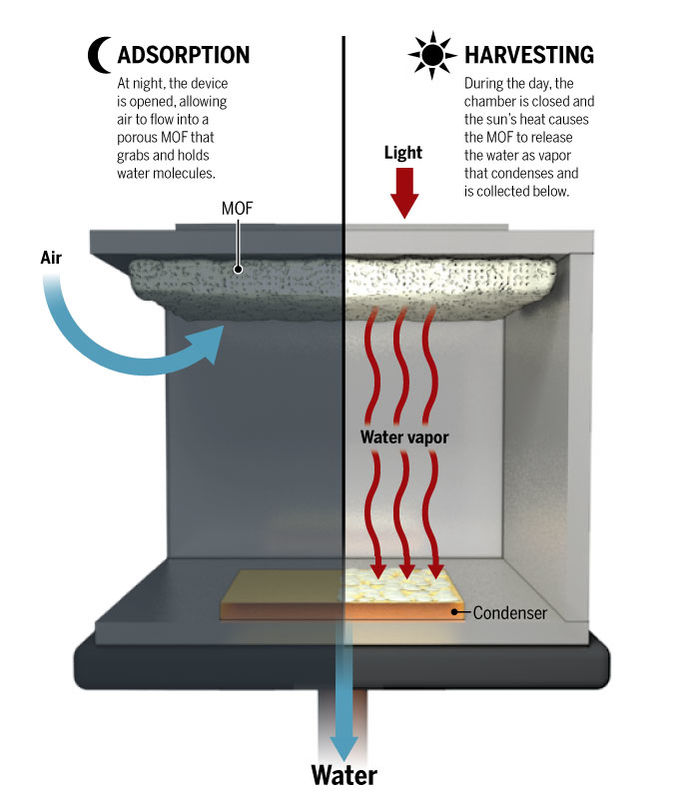 Researchers from MIT, UC Berkeley, Lawrence Berkeley, and King Abdulaziz City for Science and Technology published a paper in Science describing a solar-powered device that uses a new type of metal organic framework (MOF) to extract up to three litres of water per day from even the most arid desert air.

UC Berkeley's Omar Yaghi invented MOFs ("porous crystals that form continuous 3D networks") in the 1990s, and more than 20,000 MOFs have been synthesized since; each one binds to a different type of gas.

The zirconium-based MOF-801, introduced in the paper, binds to water vapor even in extreme low-humidity environments. Run continuously, it "pulls" 2.8l of water out of desert air per 24-hour cycle.

At $150/kg, zirconium is too expensive to use for a mass-produced product intended to be distributed to people living in arid environments, but Yaghi proposes further work that would swap in aluminum, which costs 1% of the cost of zirconium.

The system Wang and her students designed consists of a kilogram of dust-sized MOF crystals pressed into a thin sheet of porous copper metal. That sheet is placed between a solar absorber and a condenser plate and positioned inside a chamber. At night the chamber is opened, allowing ambient air to diffuse through the porous MOF and water molecules to stick to its interior surfaces, gathering in groups of eight to form tiny cubic droplets. In the morning, the chamber is closed, and sunlight entering through a window on top of the device then heats up the MOF, which liberates the water droplets and drives them—as vapor—toward the cooler condenser. The temperature difference, as well as the high humidity inside the chamber, causes the vapor to condense as liquid water, which drips into a collector. The setup works so well that it pulls 2.8 liters of water out of the air per day when run continuously, the Berkeley and MIT team reports today in Science.