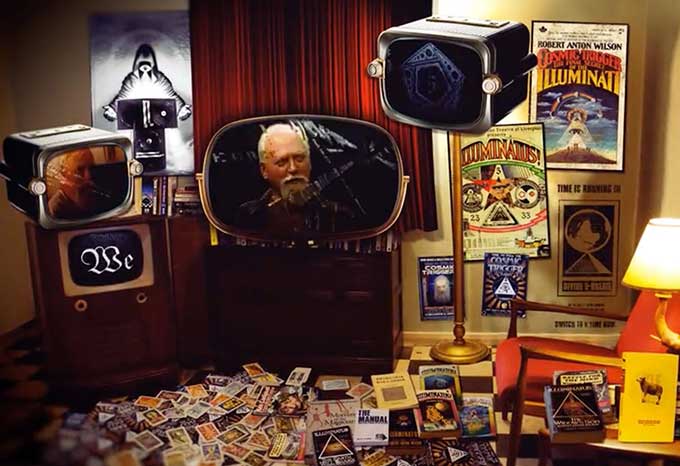 The mastermind behind such a unique endeavour and artistic achievement is director Daisy Campbell, who pulled some cosmic and genealogical strings to bring her vision to life. Daisy is the daughter of the late famed British director Ken Campbell, who achieved notoriety in the 1970s for his nine-hour adaptation of the epic science-fiction trilogy Illuminatus! by Robert Anton Wilson and Robert Shea, among other works. Daisy half-jokingly says she was conceived backstage during the show run (where her mother, actress Prunella Gee, interpreted the role of Discordian Goddess Eris).

In 2013, Daisy received an inner call and decided to answer it, adapting Cosmic Trigger into a play, a manifestation of her inherited artistic and theatrical legacy — both in homage to the mind-expanding philosophy of Wilson and to her father's epic production of Illuminatus! Synchronistically attracting a crew of crazy comrades and producers, the whole production became a full-throttle magical adventure for all involved. Cosmic Trigger — The Play eventually debuted in Liverpool in 2014, creating the space for finding the others .

RAW has been a true maverick of the mind, arguably one of the most intriguing and important esoteric thinkers to emerge from the American counterculture. Uncle Bob, " the Carl Sagan of religion, the Jerry Falwell of quantum physics, the Arnold Schwarzenegger of feminism, the Helen Keller of art and music, the Nelson Mandela of white supremacists, the James Joyce of swing set assembly manuals, the Lenny Bruce of funerals, the Salvador Dali of assembly line workers" (1)

RAW's works deeply affected and stretched many minds. There is deep, widespread sense of gratitude among those whose lives he touched with his books, talks and friendship. His mind-stirring books are paper-and-ink equivalents of psychoactive compound, providing rich, meaningful metaphors for the forest of symbols we navigate and experience. Armed with an unusually creative way of using language and a peculiar sense of humor, he explored domains as diverse as chaos magick, Jungian pyschology, cybernetics, Neuro Linguistic Programming, tantric sex, yoga, Zen Buddhism, Freemasonry... and many other esoteric or counterculture philosophies. The basic tenet of his agnosticism and multi-model thinking is that any perspective we have on the world is bound to a massive tapestry of beliefs about the world itself. These sets of world-describing (or world-creating) beliefs he called reality tunnels. Once we recognize we are living inside a particular reality tunnel, which limits everything we can perceive, we gain the freedom to shift to another. Reality is always plural and mutable belief being the death of intelligence.

Our culture is turning to steam

Published in 1977, Cosmic Trigger is 40 years old this year, though it seems as relevant as ever. "In fact,” Daisy Campbell says, “the world he predicted, it’s just here, we are living in it, everything is actually happening, right here, right now. And his antidote to the world madness is to recognize the limits and dangers of our single vision and limited reality tunnels, and the hypnotic trance we are collectively living.” (2)

Further on that, writer John Higgs (himself an inspiration behind the play) wrote:

"Wilson's books depict a bewildering world of conspiracies, half-truths, lies, fake news, incompetence and our inability to find anything resembling objective truth. Or to put it another way, it describes the world as it is now, ten years after his death. (3) In Cosmic Trigger, RAW talks about the psychological state where you have no way of making sense of what is happening, where all your maps have run out, and where you have no fixed point with which to orient yourself by. He called this place Chapel Perilous. This is where we are now as a culture." (4)

Sounds like an announcement of cultural collapse and apocalypse. According to magician and graphic novel writer superstar Alan Moore, whose voice leads the opening invocation of The Play :

"Most people find the word 'Apocalypse' to be a terrifying concept. Checked in the dictionary, it means only 'revelation,' although it obviously has also come to mean end of the world. As to what the end of the world means, I would say that probably depends on what we mean by world. I don't think this means the planet, or even the life forms upon the planet. I think the world is purely a construction of ideas, and not just the physical structures, but the mental structures, the ideologies that we've erected, THAT is what I would call the world. Our political structures, philosophical structures, ideological frameworks, economies. These are actually imaginary things, and yet that is the framework that we have built our entire world upon. (...) History is a heat, it is the heat of accumulated information and accumulated complexity. As our culture progresses, we find that we gather more and more information and that we slowly start to move almost from a fluid to a vaporous state, as we approach the ultimate complexity of a social boiling point. I believe that our culture is turning to steam." (5)

Waiting for the apocalypse, let's have a party!

In his later years, Wilson had become a beloved resident character in Santa Cruz, and in 2003 the mayor of town proclaimed July 23rd to be Robert Anton Wilson Day , encouraging " all the citizens to join in commending him for consistently extending the boundaries of modern thought and providing a model of courage and intelligence in an age sadly short on heroes" (6)

This coming July 23rd, Santa Cruz will host a RAW celebration — a day of talks to celebrate his legacy, with contributions from Daisy Campbell, Erik Davis and Richard Rasa of Hilaritas Press, and an evening party with legendary DJ Greg Wilson. To receive information and details, subscribe to the newsletter on the website - or just tune in to the signals leading to the party. That's where you'll find the others! Fnord.

Images from the play by Simon Annand. Poster by: Amoeba Designs

Ruwix is a collection of online puzzle programs and tutorials. Discover the secret of your unsolved Rubix Cube.