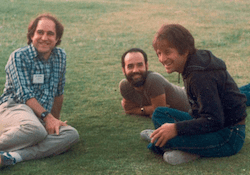 Alice and Bob are the hypothetical communicants in every cryptographic example or explainer, two people trying to talk with one another without being thwarted or overheard by Eve, Mallory and their legion of nefarious friends.

Alice and Bob's first known appearance was in Rivest, Shamir, and Adleman's 1978 Communications in the ACM paper, “A Method for Obtaining Digital Signatures and Public-key Cryptosystems." Since then, they have enjoyed many adventures.

The potted history of Alice and Bob at Cryptocouple is a delightful way to explore the history of crypto and the way we think about secrecy and privacy.

Alice and Bob are the world’s most famous cryptographic couple. Since their invention in 1978, they have at once been called “inseparable,” and have been the subject of numerous divorces, travels, and torments. In the ensuing years, other characters have joined their cryptographic family. There’s Eve, the passive and submissive eavesdropper, Mallory the malicious attacker, and Trent, trusted by all, just to name a few.

While Alice, Bob, and their extended family were originally used to explain how public key cryptography works, they have since become widely used across other science and engineering domains. Their influence continues to grow outside of academia as well: Alice and Bob are now a part of geek lore, and subject to narratives and visual depictions that combine pedagogy with in-jokes, often reflecting of the sexist and heteronormative environments in which they were born and continue to be used. More than just the world’s most famous cryptographic couple, Alice and Bob have become an archetype of digital exchange, and a lens through which to view broader digital culture.