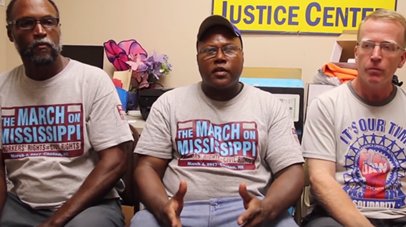 The workers at the Nissan plant in Canton, Mississippi are attempting to organize under the United Auto Workers, but Nissan is fighting the "nastiest anti-union campaign" in modern history, breaking the law so egregiously that even Trump's National Labor Relations Board has filed a series of complaints against the company.

Nissan is joined in its union-bashing campaign by Mississippi Republican governor Phil Bryant, who has told the people of his state that asking for a living wage and humane working conditions will "end manufacturing as we know it in Mississippi."

Nissan employee Morris Mock doesn't think the scare tactics will work: "Workers are numb to it. Most of them been in there 14 years, and in 28 days, you can’t convince a Nissan worker that you are a good company."

The UAW is undertaking an extensive door-to-door campaign to visit workers in their homes to discuss the union. The UAW has shipped in staff from all over the country to help in the effort.

Other unions from around the south have shipped in organizers from across the country to assist in the outreach to the plant’s nearly 4,000 workers.


Nissan has responded with fierce opposition. The company has blitzed local TV with anti-union ads and stands accused of both threatening and bribing workers to vote no. It requires workers to regularly attend anti-union roundtable group meetings as well as one-on-one meetings with their direct supervisors, some of whom have worn “vote no” T-shirts to work.