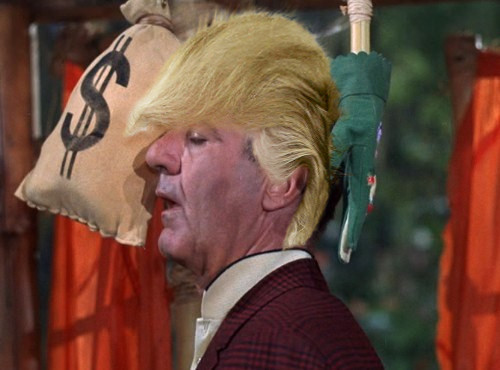 The logic of Republican "trickle down" economics is that giving "job creators" more money per hour worked incentivizes them to keep working, and thus creating more jobs.

But the GOP tax plan rewards the idle rich who do not work at all. First, it takes away the modest estate tax for the richest 0.2% of Americans, making it less necessary for the children of rich dead people to actually start and run businesses in order to maintain the family fortune.

But more significantly, it constitutes a frankly bizarre giveaway to people who earn "passive income" by doing nothing to manage their businesses, while taxing those who actively participate in the business's day-to-day running.

That's because of how it treats "pass-through" income from LLCs, S-corps and similar entities, often used by small businesspeople and entrepreneurs (but also widely used by the super-rich to structure vast fortunes). People who are able to receive income through pass-throughs instead of salaries will get a huge tax-break: the best-paid salaried will pay 39.6%, while pass-through income will be taxed at 25%.

But if you are actively involved in running your business, that 25% rate is only applied to 30% of the pass-through income, and the remaining 70% will be taxed as salary. Meanwhile, if you do not actively manage the business, your whole income will be taxed at the lower rate.

This is bizarre and virtually unprecedented in US tax code and seems an admission that the fantasy that "job creators" have good genes that uniquely enable them to benefit the whole society is just rubbish, and the real reason to let rich people get richer is that it's quite nice to loaf around on your ass and be brought daiquiris by cabana boys.

Consider a hypothetical, similar to one New York University School of Law’s Lily Batchelder suggested to me recently: A family business has been passed down to several siblings with varying levels of industriousness and IQ.

Under the Republican tax bill, the lowest tax rate is paid by the ne’er-do-well brother, rather than by the worker-bee sister who actually grew the business. Although, with a good enough accountant, she might be able to convince the Internal Revenue Service that she’s just as lazy and uninvolved as her brother.

This is a strange way to design tax incentives. As New York University law school professor Daniel Shaviro has noted, our existing tax code typically incentivizes people to avoid being classified as passive and instead to prove that they’re “materially participating” in running their business. This bill encourages rich people to do the opposite.