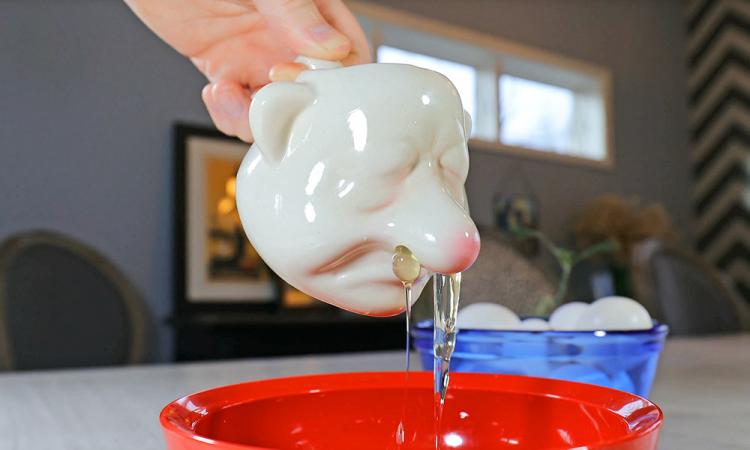 Continuing my lead up to Thanksgiving with yet another post displaying the highest in class and culture, today I am pleased to share with you one of the most disgusting things I’ve seen in kitchenware.

It’s an egg-white separator and, while its clever design deserves kudos, do we really need to see gobs of seemingly snotty glop pouring out of his nose? Yes, perhaps we do.

If you're looking for the most disgusting way to separate your egg yolks from your egg whites, look no further. The Bogeyman, as so he's called is a ceramic coffee mug-looking device that allows you to easily separate your egg whites from the yolks by straining it through his nostrils. Not only is quite disgusting, but there's just something quite satisfying about watching the goopy egg whites slowly make their way through his nostrils. You almost get that same refreshing feeling after emptying your own nostrils while you have a plugged-up nose.

Priced at under $11 at Oddity Mall, if you want this you already know it.

Tavola Mediterranea bills itself as the “home of culinary archaeology on the web,” and had shared for years a recipe for making Gingerbread Cuneiform Tablets: Most of you who read my articles, or cook with my recipes, know that I enjoy making edible archaeology. I find it to be an immersive, experiential, and multi-sensory avenue […]

Williams Sonoma’s $30 “Reversible Meat Tenderizer” is described on its website as an “impressively weighty pounder” and “two tools in one.” (It’s also available on Amazon as the Leifheit Pro Meat Tenderizer Tool) One side is smooth for flattening meats and poultry; the opposite side has “teeth” for tenderizing. Triple-plated-chrome construction over a zinc core […]

I just bought this ten-pack of 16-ounce pub beer glasses on Amazon for $(removed) They have great reviews on Amazon. I don’t know how long they will be at this price. They been as high as $(removed) recently. UPDATE: Price is now $(removed)!