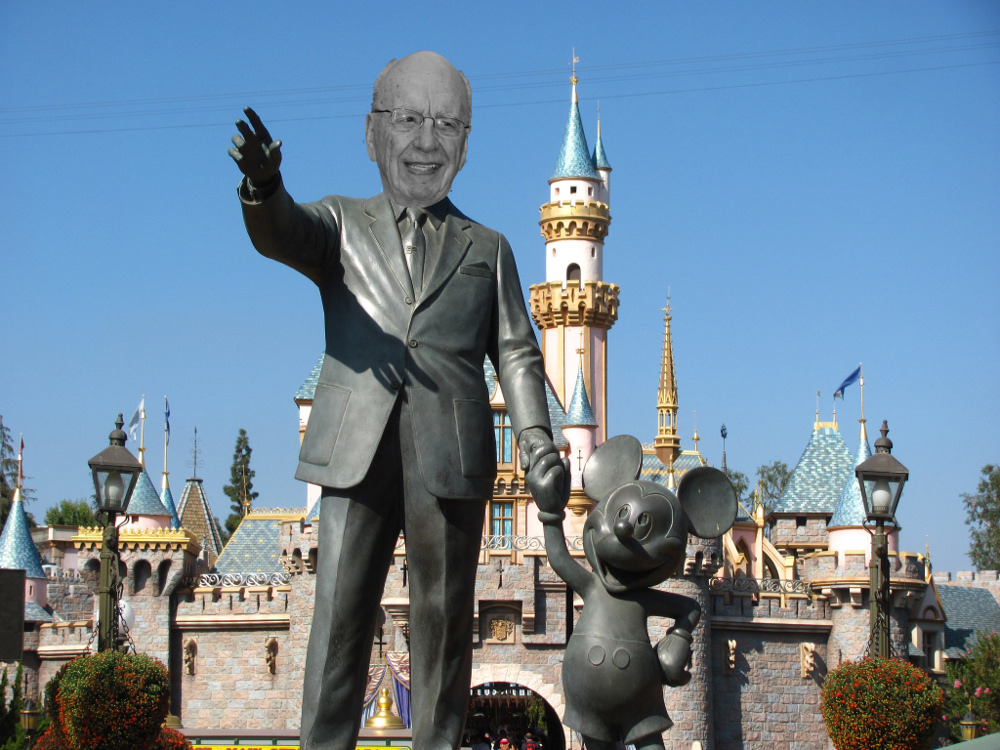 Most of 21st Century Fox's assets now belong to Disney, a company that is famous for its liberal messaging and blockbuster movies that stress social justice themes, from Star Wars to Coco to Frozen, and Rupert Murdoch, the architect of the right-wing takeover of nations on several continents, is now the single largest shareholder in Disney.

Murdoch has a long history of mixing business and politics: his newspapers are a vehicle for laundering political bribes, paying right-wing politicians farcical sums to write inconsequential columns, vastly enriching them and making them beholden to Murdoch in the process; his publisher Harpercollins likewise pays massive advances to right-wing politicians for flimsy, ghost-written memoirs and nonfiction titles which are mostly pulped when they fail to sell in a way that could possibly justify the advance, which the likes of Sarah Palin get to hang on to, all without any direct transfer from Murdoch to her or her campaign.

This is only possible because of the frankly bizarre structure of Murdoch's companies, in which the majority of shares are not entitled to votes, meaning that Murdoch's minority stake gives him a majority say in terms of spending his shareholder's money, and he's never been shy about raiding the corporate piggybank for his personal projects, including blowing £415m on his daughter's do-nothing company Shine, as a kind of nest-egg for one of his many awful children -- his sons were hip-deep in the UK's newspaper surveillance scandal, with tabloids spying on the families of murdered children by hacking into their voicemails.

Murdoch is a curious figure in the 21st Century world of financialized business, in which financial engineering to benefit "activist investors" are the order of the day. He is a political and ideological oligarch, someone who wants to use his money to change the world -- imagine Donald Trump, except with ambitions to shape nations, rather than making reality TV shows and building shitty skyscrapers and lying about how tall they are.

Disney, meanwhile, is another curiosity in of 21st century business -- on the one hand thoroughly financialized and acting like any other vehicle for converting accounting practices into dividends; on the other hand, publicly and internally beholden to high-profile artists whose political views are on display in the products the company makes. These views only shape the message of the business, but not its practices: it's a company that still lobbies (through its industry associations) for GOP-style tax-breaks, against Net Neutrality, and who happily expands into markets that lack democratic fundamentals and is perfectly comfortable with manufacturing its social-justice merchandise in Dickensian overseas sweatshops.

The marriage of these two firms, activist in their own way, financialized in their own way, will be a curious phenomenon to consider. It's both extraordinary (given the distinctive character of these corporate "persons") and banal, in a world where antitrust enforcement is a historic curiosity and financial engineering drives us towards bloated, winner-take-all firms that choke out all the sunlight that might reach the shoots of new firms far below their soaring canopies.

To complete the integration, a legacy-defining task, Robert A. Iger, Disney’s chairman and chief executive, agreed to renew his contract for a fourth time, delaying retirement from July 2019 to the end of 2021. Mr. Murdoch asked Mr. Iger to stay as a condition of the deal, which was valued at $66.1 billion including debt.

“We’re honored and grateful that Rupert Murdoch has entrusted us with the future of businesses he spent a lifetime building,” Mr. Iger said in a statement.

Mr. Murdoch added, “I firmly believe that this combination with Disney will unlock even more value for shareholders as the new Disney continues to set the pace in what is an exciting and dynamic industry.”