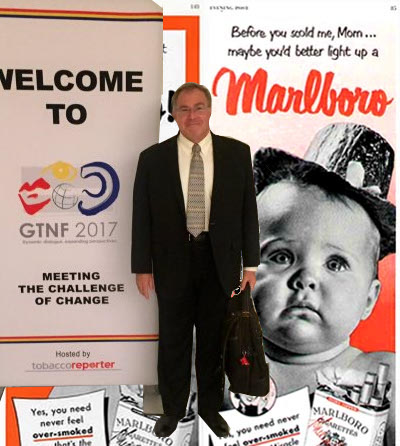 Derek Yach, president of The Foundation for a Smoke-Free World, sent a letter to 344 public health researchers and groups inviting them to bid for grants from a $1b fund set up by tobacco giant -- the list was a roster of Yach's former colleagues from his stint at the World Health Organization.

The WHO has condemned Yach's use of this list, and Yach's own protestations that his group is not beholden to the tobacco industry are belied by other leaked emails from Yach's account, which shows that he was in ongoing communications with Philip Morris employees about the grants.

Yach's group has been blacklisted by the WHO's Framework Convention on Tobacco Control, which warned participants that associating themselves with the Philip Morris-backed foundation would disqualify them from participation in the FCTC, which considers actions by the foundation to be "tobacco industry interference."

Yach, who worked for Pepsico after his stint at the WHO, has been condemned by the WHO secretariat for implying that he is still affiliated with the WHO.

Philip Morris is one of the tobacco giants that was convicted of fraud by the US DoJ for deliberately undermining the science linking tobacco use to cancer, resulting in millions of deaths. The company has used global trade deals to force governments to reverse laws that limit tobacco sales and require warning labels and plain packaging for cigarettes and loose tobacco.

Yach’s email is addressed: “Dear Colleagues,” and was sent from his own email account. He invited the 344 addressees to submit their letters of intent for the foundation’s “early scoping grants.” He says the projects will ensure “effective and innovative approaches to reduce health impacts and deaths from smoking.” The email went out just two days before the application for this grant closed on December 11 and says that the foundation has received “numerous submissions and collective input.”

“Please encourage your network to contribute as well,” says his email, which he ends with thanking everyone for their “continued support.”

Some find it strange that Yach revealed his contact-list in this email. “Some might start to wonder who on the list are actual supporters. It may aim to create a climate of suspicion and divide in the tobacco control community,” says Franklin Apfel, former head of communications for WHO Regional Office for Europe from 1995 to 2002. Apfel was not on Yach’s mailing list but has been involved in tobacco control including in the ‘Tobacco Kills-Don’t be Duped’ project. Perhaps the open mailing list was to show that “there is nothing to be ashamed of here,” says Apfel.