It's a Line-Cutting World After All 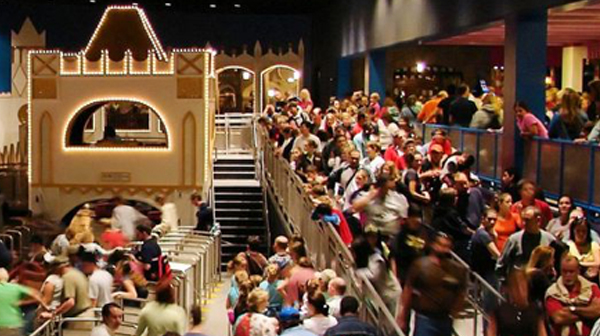 Walt Disney World is apparently planning to allow guests who stay at their most expensive resorts with "club level" service to buy cut-the-line ride Fastpasses for $50/day, according to WFTV's Chip Skambis.

This privilege would be only for those who stay three nights in club-level rooms, which seem to go for about $800/night and up (way up).

Disney has long tried to seem egalitarian in the way it treats ride lines. The Universal Orlando theme parks down the road have no such compunctions -- they allow anyone willing and able to pay $170 - $190 per day to cut past every poor slob who could only afford the $110/day admission price.

But Disney has avoided this overt wealth-pandering, basically having everyone play by the same line-waiting rules. Sure, Disney has had its “VIP tour service,” in which, for $425-$600 per hour (that’s not a typo: per HOUR) you can hire your very own line-cutting top-flight Disney “cast member,” but that's clearly for the super-rich, and who wouldn't cater to that group? Not even the most militant Marxist would want to see Mark Zuckerberg and family among the crowd waiting in line for Peter Pan’s Flight.

But I just came from Disney World, and I could see the writing on the wall.

I can tell you that Fastpasses have now evolved into a form of cut-the-line currency, totally divorced from any logistical problem-solving. You are basically allotted three per day on your electronic wristband, and you don’t need to appear at the ride to obtain them anymore; they can be obtained on an app before you even show up at the park (60 days in advance, in some cases).

But (as I just learned from this article) extra Fastpasses are also currently issued to people who purchase certain “vacation packages,” and also to people who attend a hard-sell Disney time-share sales presentation. I saw Fastpasses given out as prizes to audience participants in shows.

So I was unsurprised to see this report of a planned sale of the new Fastpass currency to Disney’s most lucrative guests.

The 20th century idea of everyone going to places like Disney World and having basically the same experience is just too quaint for this new have-and-have-not world. It seems to me that not only do the rich expect a way to pay out of every inconvenience ordinary people suffer, but ordinary people fully expect that this is the way things will work.

Disney does love its princesses.