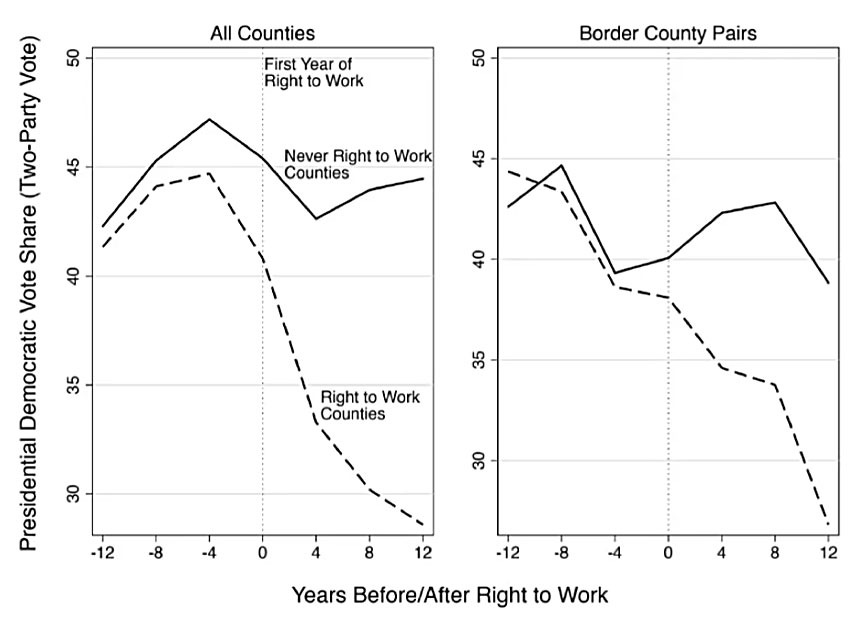 For decades, Democrats in power and in opposition have traded away labor laws and rules that protected unions in order to gain short-term advantages in political horse-trades, and now, with union membership down from 26 to 10.7% since the Reagan years, districts that formed Democrats' "blue wall" have been poverty-struck and have flipped for Trump.

A new NBER study quantifies the effect that union membership has on Democratic support, comparing counties that cross state lines, with one half in a 'right-to-work' state and the other in a state that protects unions, finding that the difference that unionization makes in Democratic support would have been enough to deliver the presidency to Democrats in 2016.

As New York Magazine's Eric Levitz points out, Republicans know this, even if Democrats don't (his aphorism: "The GOP understands how important labor unions are to the Democratic Party. The Democratic Party, historically, has not").

This could have been a golden age for American liberalism. The Democratic Party — and the progressive forces within it — have so much going for them. The GOP’s economic vision has never been less popular with ordinary Americans, or more irrelevant to their material needs. The U.S. electorate is becoming less white, less racist, and less conservative with each passing year. Social conservatism has never had less appeal for American voters than it does today. The garish spectacle of the Trump-era Republican Party is turning the American suburbs — once a core part of the GOP coalition — purple and blue.

If the Democratic Party wasn’t bleeding support from white working-class voters in its old labor strongholds, it would dominate our national politics. Understandably, Democratic partisans often blame their powerlessness on such voters — and the regressive racial views that led them out of Team Blue’s tent. But as unions have declined across the Midwest, Democrats haven’t just been losing white, working-class voters to revanchist Republicans — they’ve also been losing them to quiet evenings at home. The NBER study cited by McElwee found that right-to-work laws reduce voter turnout in presidential elections by 2 to 3 percent.

From the Bargaining Table to the Ballot Box: Political Effects of Right to Work Laws [James Feigenbaum, Alexander Hertel-Fernandez, and Vanessa Williamson/National Bureau of Economic Research]