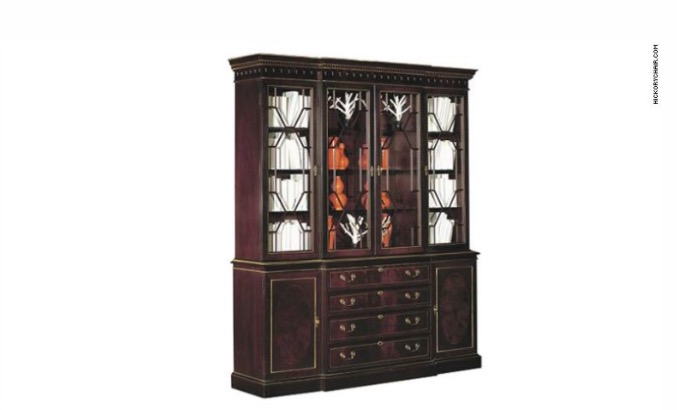 Housing and Urban Development Secretary Ben Carson now says he is shocked, just shocked, that the new dining set ordered for his office cost $31,000, which was $26,000 more than legally allowed. "I was as surprised as anyone to find out that a $31,000 dining set had been ordered," he said in a statement. "I have requested that the order be canceled. We will find another solution for the furniture replacement."

A former former senior HUD official, Helen Foster, said she he was harassed and demoted for questioning orders to buy the furniture and was so distressed that she would vomit on her way home from work every day.

That wasn't the only thing to get sick over. From CNN's descriptions of the dining set, it's clear that Carson's taste in decor is vomitous, too:

The $31,000 dining set includes a table, sideboard, breakfront -- all in mahogany -- and 10 mahogany chairs with a blue velvet finish, according to the company that sold the furniture to the agency and purchase documents obtained by CNN.

On the eve of Trump's inauguration [Foster] alleged she was told by acting HUD director Craig Clemmensen to help Carson's wife, Candy, obtain funds that would be used to redecorate the former presidential candidate's office. However, when she pointed out that there was only a statutory limit of $5,000, she was allegedly told, "$5,000 will not even buy a decent chair."

By Feb. 10, Foster maintained her position that $5,000 was the limit, but she was told repeatedly "to 'find money' for Mrs Carson," the complaint said, according to The Guardian. Clemmensen also allegedly told Foster that previous administrations had "always found ways around that in the past."

Carson said one of the reasons he needed new furniture was because the existing pieces are "unsafe."

House Oversight Committee Chairman Trey Gowdy, a South Carolina Republican, has asked HUD for records relating to office furnishings since the beginning of 2017.

In his letter, Carson said the previous dining room set was worn and needed to be replaced.
"The secretary's dining room is used for business luncheons with a wide variety of people and groups. The furniture is 30 to 50 years old and is very worn. It has also been characterized as unsafe," he wrote. "I did not request new furniture, but asked if it could be remediated. I was subsequently told that it was beyond repair and needed to be replaced.

Meanwhile, Obama-era HUD Secretary Julian Castro told CNN in an interview that he "never felt as though we needed to replace the table or chairs."