What's new in the world of tabletop gaming? 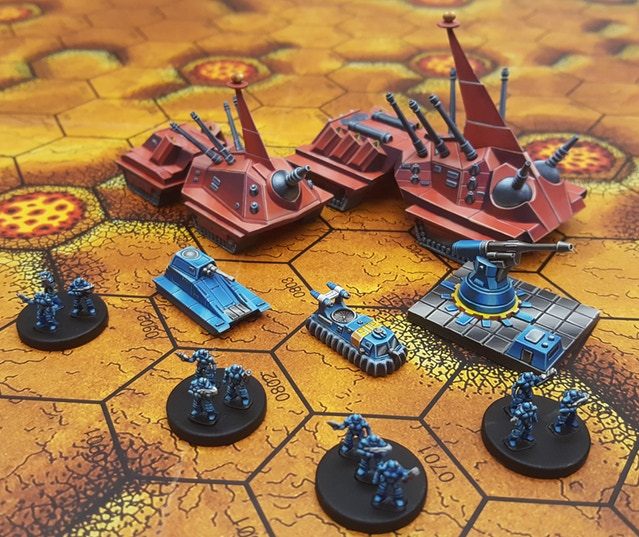 I've been getting a lot of review copies of games sent to me lately, so I thought, periodically, I'd share some of what looks interesting and fun to me with Boing Boing readers.

Stuffed Fables, by Mice and Mystics designer, Jerry Hawthorne, is a cooperative story-telling miniatures game that literally takes place inside of an illustrated storybook. I love the backstory here. The game is played within ten adventures that take place in a little girl's bedroom (with each adventure triggered by a milestone event in her life, like moving into a big girl bed). As she sleeps at night, her nightmares come to life and crawl out from under her bed.

To defend her from these boogeymen, her beloved stuffed animals ("stuffies") come to life and go to battle against these monsters from her nightmares. The little girl remains none-the-wiser about the epic battles that take place as she slumbers. While the game has a fairy-horror theme, and awesome miniatures to fit that theme, it's not very dark to play. It's rated 7+, and that probably holds true in practice, although the rules and game mechanics might prove a little too fussy for younger attention spans. The plastic miniatures (23 of them), the storybook/gameboards, and all of the rest of the components are gorgeous and very much fit the dreamy/fairy-horror theme. I'm planning on doing a Stuffed Fables game night at my house soon and requiring players to come in PJs and bring their own stuffies. Molly, optional.

OGRE has a soft spot in my geeky little hexagonal heart because it was the first map and counters wargame I ever bought. This was the ancient "pocket edition" from the late 70s which sold for $2.95. OGRE-love is stronger than ever these days, with a multitude of ways of playing the game (look for a feature on current OGRE madness soon). The latest offering from Steve Jackson Games is a wonderful set of plastic OGRE miniatures.

The set includes 40 6mm plastic miniatures, including two OGRE cybertanks (1 Mk III, 1 Mk V). This set is sold as a box of miniatures for use with 6th edition OGRE, but the box also includes the OGRE Lite rules, a lovely pearlescent d6 OGRE die, and two erasable record sheets for your OGREs. With all of this, you basically have everything you need to play (minus an irradiated post-apocalyptic battlefield to further irradiate).

Xanathar's Guide to Everything
Wizards of the Coast, $29

The first major rules supplement to the wildly-popular 5th edition Dungeons & Dragons, Xanathar's Guide to Everything doesn't exactly contain everything (that's the Beholder talking), but it does contain some welcome and exciting additions to the game. This is definitely a book designed to inspire more of the roleplaying and world-building elements of D&D. A lengthy section on subclasses and character class motivations and backstories is designed to add more depth and dimension to your characters. Many of the new spells, such as Ceremony (rituals for marriage, funeral rites, dedications), Mighty Fortress (conjuring a defensive stone fortress from the ground), and Temple of the Gods (conjuring a temple mirage that can trap enemies who attempt to enter it), are all designed to make your characters more true-to-type and gameplay richer and more cinematic. The book also has a section on Tools that character classes use, random encounter tables for different bio-regions, new traps and magic items, a character name generator, and lots more. Throughout, Xanathar, Waterdeep's most notorious Beholder and crime lord, offers his snarky, menacing thoughts in the marginalia. With recent books like Volo's Guide to Monsters, and now Xanathar's Guide to Everything, the D&D manuals themselves are in fine roleplaying character.

Osprey continues to knock it out of the park with their Frostgrave fantasy skirmish game system. Last year saw a new area of the Frostgrave world fleshed out with the release of Frostgrave: Ghost Archipelago, a tropical, pirate-y game set within a mysterious, enchanted group of islands that winks in and out of existence every few centuries. With Ghost Archipelago: Lost Colossus, the ethereal islands get a series of interlinked adventures to go on in search of the broken pieces of the Colossus of Argantheon. Finding the pieces of this gigantic ruined statue may provide clues to the Crystal Pool, the lost, magical wellspring of the Archipelago, which grants various powers to those who drink from it.

Based on a number of breathless reviews, I bought this game for several people as gifts this past Christmas. Imagine if chess pieces grew as you played and shaded out the pieces of your opponent. That's kind of what happens in Photosynthesis. You're growing trees on a game board. A sun marker moves around the board as you play, shining light on some trees, making them grow, and in the process, throwing shade on other trees, slowing down their growth. The game is easy to learn but has impressive tactical depth as you have to think ahead to where the sun will be in moves ahead and how you can use the position of the sun (and the shade cast by your trees) to slow the growth of your opponents' trees. The artwork for Photosynthesis is gorgeous and the components are top quality. Punching out and assembling all of the trees and counters is a bit of a pain, but the lovely results are worth it.

Nerds of a certain age will likely (and lovingly) remember Car Wars, the Mad Max-y post-apocalyptic car combat game that Steve Jackson released in the 1980s. The game components were minimal and funky (paper battlemats and thin cardboard chits for the vehicles) and the rules were notoriously crunch, but that didn't stop masses of high-domed gamers from falling in love with the world of Car Wars. In a similar vein comes Gaslands, a new vehicular combat game from Osprey with a far more streamlined rule set. Continuing the Osprey formula of engaging game worlds, explored through tight, eminently playable rule sets, all presented in slim, inexpensive rulebooks with lovely and evocative artwork, you can get deep into Gaslands with little cash outlay. Besides the rulebook (which has templates and counters in the back to photocopy, print, and cut), all you need are some weaponized cars to send into battle. For these, you get to convert Matchbox and Hot Wheels cars.

I had a ball going through my gaming miniatures "bitz box" looking for weapons and gubbins to add to my first Gaslands battlecar.

I cannot tell you how much fun it is to get some of these metal toy cars (you can get bundles of them on eBay for pocket lint) and to use whatever bits and bobs you have laying around to turn them into road warriors. Gaslands has a great backstory, too. In an alternative universe timeline, humans colonized Mars by the 1980s. All of Earth's rich and elite quickly moved to the Red Planet, eventually returning to Earth to strip it for parts and lay waste to what was left. For the entertainment of the Martians, they created a TV show, your basic Death Race 2000, called Gaslands, where car warriors combat to the death. The year is now 2018, and for the 10th anniversary of the Gaslands TV show, they're offering the winners a one-way ticket to Mars (and to freedom).

Another recent rules release from Osprey that looks like a lot of fun is Kobolds and Cobblestones. For those familiar with gang-based games like Necromunda, Kobolds... is a similar kind of skirmish game which takes place on the streets of a fantasy city riddled with crime, corruption, and gang rivalry. From a pool of sketchy characters from the standard fantasy races (humans, dwarves, elves, goblins, kobolds, etc) you choose a small gang and go on adventures of plunder, profit, and white-knuckled street fighting. One of the fascinating mechanics of this game (perfect for a game of crime and gang warfare) is that you use playing cards and poker hands to resolve all combat and other actions in the game. You even use the length and width of regular playing cards to measure distance. Neat!

The recent release of Star Wars: Legion joins a growing list of Star Wars game titles from FFG. Let's see, there's Star Wars: The Roleplaying Game, Star Wars: Edge of the Empire, Star Wars: Force and Destiny, Star Wars: The Card Game, Star Wars: Destiny, Star Wars: Armada, Star Wars: Imperial Assault, Star Wars: X-Wing. And now, Star Wars: Legion. Legion is FFG's attempt at creating a hugely popular Star Wars miniature wargame for ground battles like they did for space combat with X-Wing and Armada. The starter box comes with 33 gorgeous 28mm plastic figures, including an AT-RT, two speeder bikes, Vader and Luke Skywalker. Legion is the only game in this list that I haven't at least seen in person and monkeyed around with. It looks lovely from the video reviews, but I've heard many reservations from my gaming friends about yet another FFG Star Wars money pit and another miniatures battle game to paint up and play. There are so many amazing tabletop miniatures games these days. For me personally, I already have a big investment in X-Wing and Imperial Assault. I have no desire to buy, build, learn, and play another Star Wars game. But, as in all things, Your Mileage May Vary.

Ben of Questing Beast has begun reading all of Gary Gygax’s 1979 roleplaying game masterwork, the AD&D Dungeon Masters Guide, on YouTube, After the first two videos, at around four hours in, it look like he’s up to page 33. He estimates it’ll take some 40 hours to read the entire book. Of all of […]

Ever since reading Gary Fine’s Shared Fantasy: Role-Playing Games as Social Worlds, in 1983, I have been keen on the idea of using RPGs as a learning tool, for sandboxing social interactions for the socially challenged, and as a potential therapeutic tool. This idea seems to really be gaining traction during the current D&D/RPG explosion […]