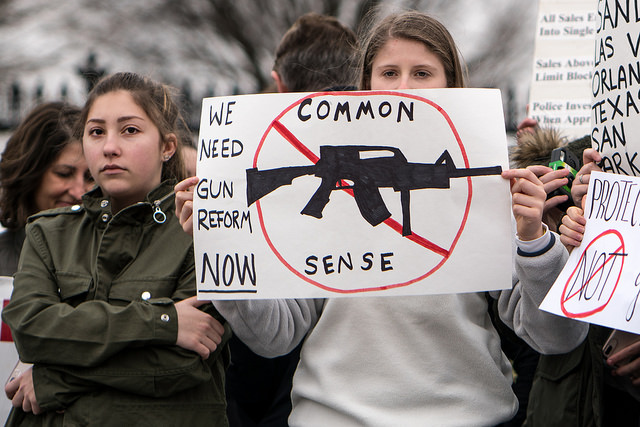 On March 7, the Florida legislature passed a gun control bill in a bipartisan 67-50 vote, banning bump-stocks and imposing a 3-day waiting period on long-gun purchases and raising the minimum age for their purchase to 21; the legislation is a mixed bag as it also includes millions to arm and train school employees.

Despite this sop to gunhumpers, the NRA ardently opposed the legislation, which would normally have guaranteed that it would die. Instead, student activists from across Florida marched on the Tallahassee legislature, pouring on pressure for three solid weeks to see the legislation passed. The bill does not include their key demand: a ban on assault-style weapons whose primary use is anti-personnel.

Florida governor Rick Scott says he opposes the legislation because of its provision for arming teachers, but has stopped short of promising to veto it.

In the days leading up to the vote, the NRA’s Florida lobbyist, Marion Hammer, issued an “emergency alert” to members asking them to contact Republicans and demand they vote no. “Neither the 3-day waiting period on all rifles and shotguns, raising the age from 18 to 21 to buy any firearm, or the bump stock ban will have any effect on crime,” she wrote.

But Republican leadership did not bend. In the closing debate, many lawmakers made reference to the outpouring of public input they had received in recent weeks, and several House members struggled to hold back tears as they described what had happened in the school.

“I have been called a murderer,” said Rep. Thomas Leek (R), of Daytona Beach, who voted for the bill. “I have been told I don’t respect the Constitution.” He said he ultimately decided to block out the outside lobbying and make the decision alone.