Spend 5 Minutes as a Piece of Sushi 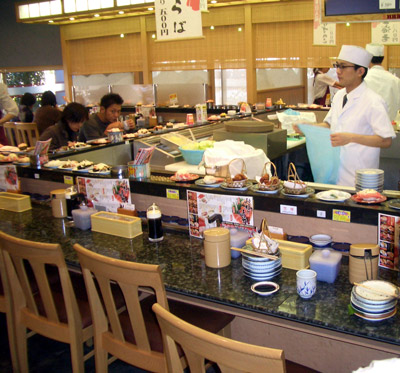 When I was a little kid, really little, my mother used to take me to a luncheonette in Rego Park, Queens, where there was a model train running on a circular track around the counter. They would put your food on it in the kitchen and the train would chug along until it came to where you were sitting. I thought it was the coolest thing I’d ever seen next to Robot Commando. The joint was called The Hamburger Train and here's an article about it. (The photographs—yes, photographs actually exist—are courtesy of Mark Lewis, grandson of the original owner.)

I am always amazed at how my distant memories can be found in some form or other on the internet. And that’s all it is: a memory. Restaurants today make more money when they can take a cut of the server’s tips. You don’t see any automats any more, either.

In Japan, food delivered on conveyer belts is very common, particularly sushi. The system was invented in 1958 by Yoshiaki Shiraishi. Today there are countless pieces of sushi rolling forth on conveyer belts around the world, but The Hamburger Train beat the sushi by taking its first trip on the railroad tracks in 1954.

Regardless, have you ever wondered what it’s like to be a little piece of raw fish watching the world go by? Now’s your chance.